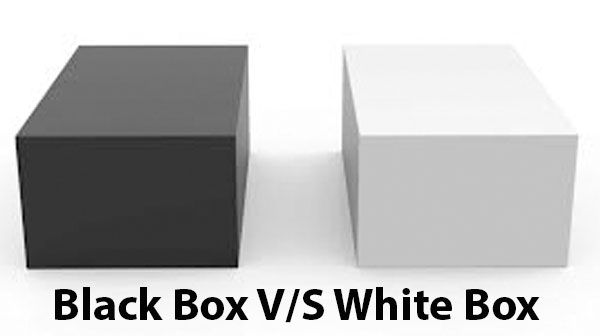 Testers' development of software is the result of the desire to meet certain requirements of the customers and the stakeholders. These requirements are satisfied with the help of writing programs. These programs or codes give objects the functionality they are intended to perform. So, once the development process is done, it is necessary to test whether all the functionality is covered in the development process or not and each of them is working exactly the way it should. It is called Black-Box testing. Along with that, it should also be tested that the code is executing as desired and in an efficient way. It is called White-Box testing. Black-box testing and White-box testing are the two kinds of software testing that cover a major part of the testing need. In this article, we will discuss ‘what is Black-box testing and White-box testing?’ and ‘what makes them different from each other?’.

Black-Box testing involves looking for the defects in the functionalities of the software without caring about ‘how the program has been written and what is the algorithm followed?’.

It just checks, whether the software can meet the requirements it is developed to or not? Because it doesn’t matter how the software is developed if it’s not good enough to satisfy the needs of the customers and stakeholders. A functionality is chosen by the tester and then different inputs including the boundary conditions are given to the software and then the generated output is compared with the correct output. If they come out to be the same then the functionality is passed else fails. The tester tries to put each requirement to the test. He doesn’t need to have any programming knowledge.

Below are the techniques of Black-box Testing:

Various input combinations are provided to the system and their corresponding response is noted in a tabular form for further analysis.

The functionalities are tested on the boundary value inputs which are the upper and lower limits of a variable.

In this technique, the input values are partitioned as valid or invalid input and the system is expected to have equal behavior with both of them.

The tester uses his experience to find potential errors by exploring the software.

It checks the consistency of the result by varying the conditions that can affect it.

White Box testing is also known as structural testing, open-box testing, glass box testing, clear-box testing, and transparent box testing because the tester is allowed to see through the outer shell to the internal architecture of the software.

It tests the internal code and infrastructure of the software under test. This testing is performed by using predefined inputs and then comparing the expected output with the actual output. Test cases are designed by testers who have enough programming knowledge and experience necessary for effective testing. A tester with no programming knowledge is not eligible for this testing. These test cases find defects in the internal operation of the application. It checks whether the flow of input and output is undergoing smoothly through the software and it is free from any potential security threat or not. The creation of test cases is based on the document generated during the design phase of the software.

Below are the techniques of White-Box Testing:

This testing technique checks whether the flow of data stored in the variables is going perfectly and the data is following through the correct path for generating the desired output.

It involves testing the sequence of execution of the statements and instructions. For software to work in the desired way, the program statements must execute in the correct sequence.

The design phase in the software development life cycle involves the creation of a control flow graph that includes some branches, so it is important to test that the code can execute those branch conditions.

This testing is done to execute each statement at least one time. It ensures that each statement is properly written and will not lead to an obstacle in the operations of the software.

This technique is used to test all the decision-making statements like for loop, while loop, do-while loop, if-else, and switch-case statements. It ensures that the code can execute both the possible outcomes even if the condition is true or false.