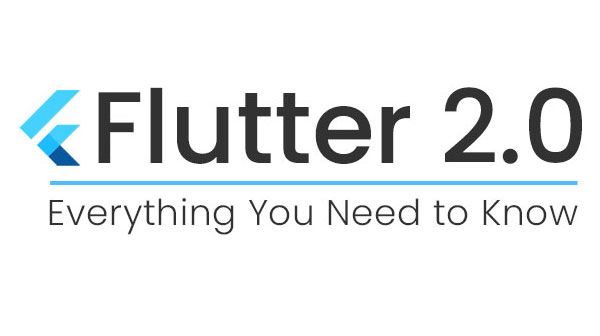 Flutter 2.0: 9 New Features That Are Available With The Latest Update

Google has launched Flutter 2.0 on March 3, 2021, at an event called Flutter to engage. There was a lot of Buzz about this launch, with several experts and experienced developers recognizing it is a watershed moment. This latest update includes features and fixes that are different in their own right.

Earlier developers used Flutter for creating Android and iOS apps. However, expanding its mobile development services to other platforms, including Mac, Windows, Linux, and embedded devices with the most recent version update. Developers can also use the new Flutter version for creating web apps and applications that run in the browser.

It is a huge relief for developers worldwide as working on different platforms for the same project is a tiresome task as the logic demands to change according to how the operating system adopts it. In addition, 24,541 problems and 17,039 PRs from 765 contributors have been fixed in the stable update version. The assessment of 1525 PRs also contributed to the voluntary PR evaluations.

The new Flutter version has a lot to like, and we will try to capture the highlights in this blog.

Below are the features of Flutter 2.0:

One of the most exciting features of Flutter 2.0 is Flutter web support. Flutter has reached a bar for the usability of code by adding support for the web platform. The release is significant as it marks the transition from a document-centric to an app-centric framework. As a result, developers at Flutter will now have the option of building apps on the site.

Flutter has also built a framework for developers for creating immersive apps by utilizing the strength of web platforms. It has also added a pic for designing versatile and interactive 2D and 3D graphics to the platform. Flutter 2.0 also includes the Canvas get-based render in addition to the HTML render. It also incorporates a connection widget that allows developers to create a web app-like experience in the browser.

The dart language has a notable addition in the form of sound null defence. It allows programmers to tell the difference between non-nullable and nullable forms. Developers provide null error crashes during development by putting this in place.

The new Flutter version has also expanded support for desktop applications in the same way it has for mobile applications. It now allows developers to provide a native-like experience across all platforms. Various features included in this experience, such as precise mouse dragging, text selection pivot points, a building context menu, and so on.

The new version will allow programmers to hurt keyboard events even after they have started. Additional ee developers could easily reorder objects in the reorderable listview widget. Another new feature in the desktop app is the redesign scroll bar widget allowing users to use their thumb to interact. The desktop Flutter software also exhibits page and down tracks. The curse even hands over the scroll bar. Moreover, the latest scroll bar theme class allows users to configure the app to their liking.

One of the most recent Flutter also updates its developers for creating more fluid resizing for Mac OS and windows. Secondly, the Flutter group has improved in terms of producing a high-quality publication. You can now expect native-like text editing, native top-level menus, and accessibility support, among other items.

The latest update of the open-source UI software development kit Flutter 2.0 also incorporates a trial version of Google mobile ads SDK. It allows developers to use the current overlay format for including native advertising and inline banners. In addition, Admob and Admanager enable developers to easily customize advertisements.

As we indicated previously, Flutter now supports Linux, macOS, and Linux. However, many developers are uncertain about designing an app that suits several screen dimensions, such as tiny, medium, and large. In addition to the computer, the development partners ask whether there are different idioms (mobile, web, and desktop) or input modalities (keyboard, touch).

The business has reinforced its iOS support with new capabilities with the introduction of Flutter 2.0. A total of 17039 PRs are tied to iOS, of which 178 are. There are an additional 23495 with state iOS restore. 67781 also enables developers to create an IPA without Xcode opening.

Sixty-nine thousand eight hundred nine will also update the new tooling to the CocoaPods version. Not only that but also new iOS controls which reflect Cupertino’s design language are available in the recent upgrade. Let’s look at each of these widgets:

A UI for the iOS search bar is CupertinoSearchTextField. The widget for the iOS sectioned visual aesthetics supports the building of the validated form fields similarly with the Cupertino FormRow, CupertinoFormSection, and CupertinoTextFormFieldRow widgets.

Developers already have access to two new widgets: Autocomplete and ScaffoldMessenger, thanks to the latest Flutter update. When we talk about Autocomplete Core, we automatically speak about the absolute minimum of functionalities you will have to provide to your Flutter app.

The autocomplete feature is long in demand. This feature lets you utilize auto-fill features in your native Flutter apps if we were to summarize them in one word. As far as ScaffoldMessenger is concerned, SnackBar is facilitated for action between Scaffold transitions.

Many developers use the open-source UI software development kit Flutter because it allows both Android and iOS apps to re-use the same code. You may add Flutter to an existing application with the App-to-App functionality. It is crucial since it saves native code and enables developers to run the code on both platforms. This function is vital.