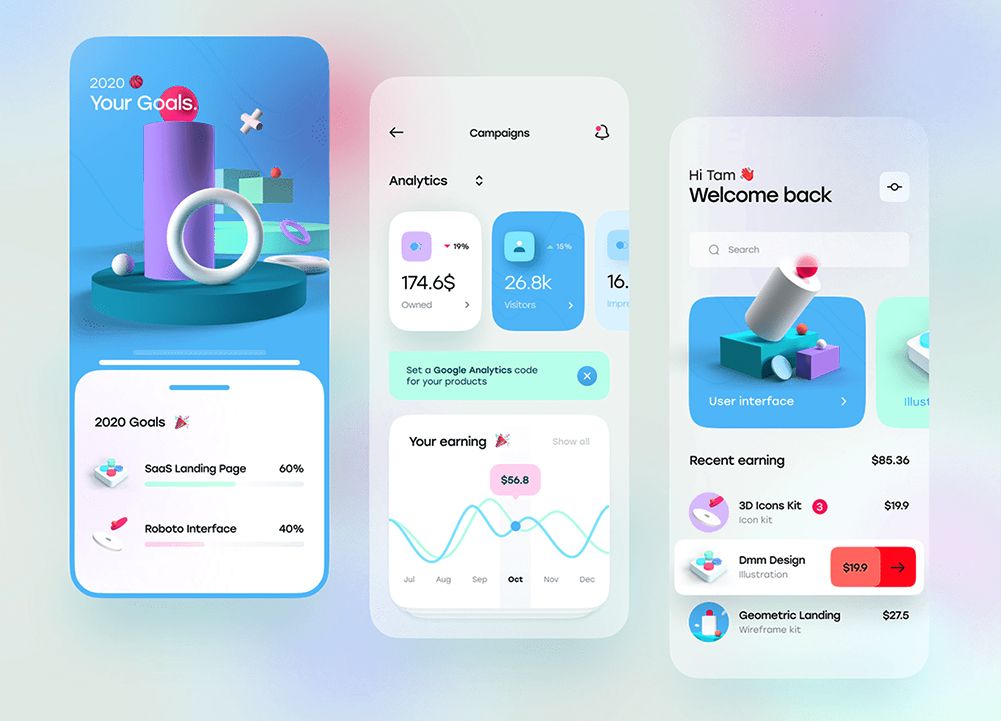 A mobile or web application’s quality not only depends upon the way it is programmed or how efficiently its workflow has been designed. The user of the application does not know about these details and don’t care until the application is satisfying their needs in a certain amount of time.

For a user, the quality of an application is judged based on how it looks and the design of the elements appear on the screen. The user interface makes a mark in a user’s mind that he/she should rely on this application or not. The user interfaces act as an intermediate in communication between the system and the user so it should be attractive enough to interest user to do so.

We will discuss the latest UI trends that are being used to enhance the user experience by improving the face of an application.

A website or an application looks so attractive when 3D elements are added on its user interface. Such kind of elements is used to represent the main visual of a webpage. A 3D elements make the user feel like he/she is not looking to the 2D screen of mobile or computer but there is something 3D space inside the screen. It creates a visual effect in the virtual world like the way we see in real 3D World.

Glassmorphism is one of the new graphic design trends in 2021. It creates a kind of illusion on the screen like you are looking through a glass.

This effect has already been used in Windows Vista and iOS 7.

These are one of the top UI designs. In AR the elements of the user interface appear to be visible in the real world. It is done by adding the camera to capture the background for the page. So, the whatever will be captured by the camera will work as space on which the elements are located.

It is generally observed that after some time we get used to with the background of an app and then it fails to interest us anymore. But with AR that background will not be fixed and it will be as random as the camera view. With VR, it gives the experience to user of being present in the space within the screen where elements are the object in the virtual world.

Many apps in the market provide the option of dark mode or dark theme. Some examples of these apps are YouTube, Whatsapp, etc. The dark mode is preferred by the user as it enhances the visibility of the main elements and text on the screen and also reduces the strain on the eyes due to the brightness of all whole screen. In this mode, the text is in bright white make it more comfortable to read and work for long hours.

Another one of the most highlighted graphic design trends 2021 is increasing the visibility of the data on the screen that helps a user in decision making. It helps in attracting the attention of the user directly at the important information which may be beneficial from the business or user perspective. It can be done by especially formatting that data so that it stand out than the rest or making them look raised.

The animated objects always look interesting on screen. The elements can be made dynamic by adding animation to them. That animation might be the demonstration of the action associated with the element or the action user needs to do to interact with the element. Nowadays, users don’t like application that looks static they want elements to move to help them explore the application. It also adds a humorous element to the user interface. They also help in better understanding the significance of the text on the screen. So animated object will be one of the most used 2021 website design trends.

Login pages are becoming top UI trends with the increase in the cases of unauthorized access attempts. This login or authentication can be done in different ways and can be made easy. There are various options like face recognition, fingerprints, password, or a pattern. It ensures that the application is operated by the user who is supposed to. Even users also feel safe while using such software as they feel the data they are storing will only be accessed by the ones they allow.

There are a lot of applications having so many elements on the UI with vibrant colors and formatting styles. Sometimes such UI looks messy and user resists to use them. Based on the utility of the software the UI can be preferred with simple formatting styles and minimum elements. Clean and Simple UI is most likely to be used for pages that contain a lot of text. In those pages, the text style should be easy to read and the theme should be used accordingly. Simplicity also helps in enhancing user experience.

User interfaces that can take instructions from the user through their voice and give the output in sound are getting buzz and user like using them over typing text.

It is an interesting way of interaction between a human and a machine. Google assistant is a common example of it. In Google Assistant, the user says what he/she wants to know about and the system also gives the response by speaking. This improves the user experience by reducing the time required for giving input and reading the output.

So, these were some of the latest UI trends that can be used in applications to build effective User Interface. The most important thing about an effective UI is the ease a user feel in operating an application and understanding the content on the screen.