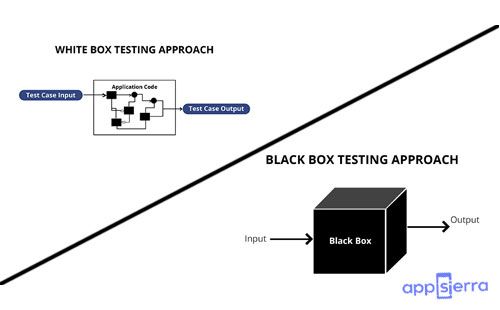 To ensure the consistency of the application, software needs to be reviewed. The act of constructing test cases using testing techniques in software testing. These test cases and methods are used by testers to test apps so that software meets stakeholders without defects. Besides, software testing also helps detect unintended mistakes, instances of use, or missing specifications. By using various methodologies and methods, testers also evaluate the same code.

What is Black Box testing?

Any software framework you want to try might be the Black-Box above. The operating system such as Windows, a website such as Google, a database like Oracle, or even your custom program, for example. You can test these applications under Black Box Testing by only concentrating on the inputs and outputs without understanding the implementation of their internal code.

How Black Box testing is performed?

There are many types of Black Box Testing, but the prominent ones are the following-

What is White Box Testing?

White box testing is a technique for software testing which involves the analysis of the operating system. This study involves the architecture of the code, components of the code, and each device’s execution. The approach was called ‘white-box testing’ since a white box is a transparent box, easily exposing to the software testers the internal structure of the program. By reviewing the code, the tester is capable of evaluating both true and invalid inputs and outputs.

First, test cases that compare the real output against predicted output can be constructed by the tester. Finally, unit and integration tests may be built by the tester. This is one of two parts of the software testing approach to Box Testing. Black box testing, its equivalent, requires testing from the viewpoint of an external or end-user type. White box testing, on the other hand, is based on an application’s intricacies and focuses on internal testing.

How White Box Testing is performed?

We have split White box testing into two simple steps to give you a simpler description of white box testing. This is what testers do by using the white box research method to test an application:

Upon reading the program and writing test cases, the tester can write tests. After that, some common types of white box tests can be employed, including: