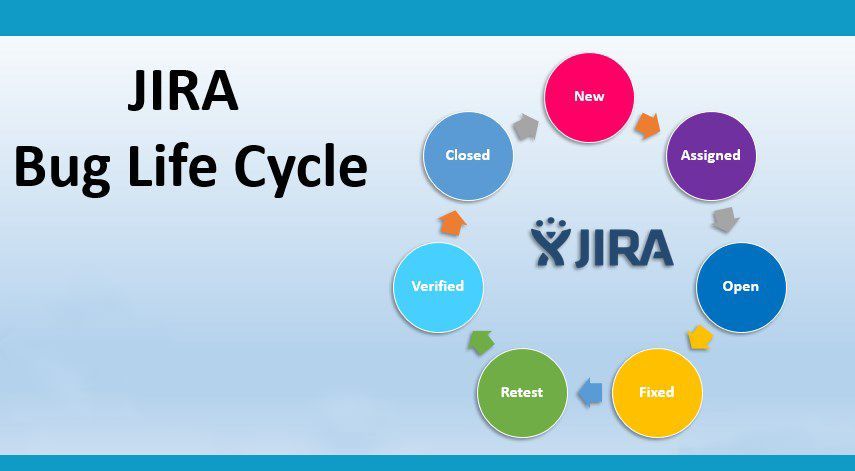 A Comprehensive Blog On Defect Life Cycle in JIRA

Defect Life Cycle or JIRA Bug Life Cycle is a cyclic procedure that defines how a defect or bug passes through various stages from the identification stage to the fixing stage i.e. it starts when a tester discovers or logs a bug and it stops when the bug is fixed. The total procedure is accomplished through the JIRA tool, which is a commercial problem or bug tracking tool formulated by Atlassian. It is generally used for issue tracking, bug tracking, and project management. It is the procedure of the report, fixes the bug, and traces the status of it. The activity or workflow of the bug or issue through several stages during the life cycle in JIRA possesses primarily three status states.

They are as follows:

The JIRA is one of the adequate commercial tools to manage the project, manage the bugs, manage the sprint, and manage the test cases. It is a marketable tool which implies not free of cost i.e. we paid for that tool. In the defect life cycle, in Jira, once the bug is postponed then the tester tests whether the bug is associated with the application scope or not. Any variation between the real and expected value is named as Issue or Error, if it is accepted by the creator then it is called “BUG”.

There are many participants in the JIRA bug life cycle, such as Bug finder (Normally Tester who can discover the Bug), Bug status group (Tester, Developer, Bug management tool (JIRA or Bugzilla), Project Manager, Product Owner), QA Manager, Bug owner (who possess the bug to fix it within the time limit).

Bug Status also is known as Defect Status in the defect life cycle is the existing state from which the flaw or a bug is presently undergoing. The objective of defect status is to specifically imply the new state or development of a defect or bug to better track and understand the real progress of the defect life cycle. The number of states that a flaw goes through varies from project to project. The Bug Life Cycle comprises several stages through which a Bug is resolved, tests the bugs, and follows the procedure until the bug exists.

Stages in the Defect Life Cycle

The stages in the defect life cycle in Jira are provided below:

1. NEW: When a bug or defect is discovered in an application by the tester during the testing stage then, it is revealed to the development team through the bug management tool JIRA. So the preliminary level of bug status is selected by the tester as a “NEW”. Here the tester builds a problem in JIRA by defining the description, issue type, summary, priority, etc. of the bug.

2. ASSIGNED: Once a new status bug is put up by the tester, then the technical or QA leads verify it and select the bug to a specific developer in the development team to work on that. Then the status of the bug is noted as “ASSIGNED” i.e. bug is approved by the developer and they will function on it to fix the bug. It is certainly a problem but when the creator accepts it, it shifts to Bug.

4. DUPLICATE: If the bug is already logged early by the tester or identical to the prior one, then the developer remarks the status of the bug as “Duplicate”.

5. REJECTED: If the bug which was selected by the developer is not a real one, then the developer notes the status of the bug as “Rejected” with adequate reasons.

6. DEFERRED: If there is a bug but no necessity to fix in this sprint or release or it is not in project scope and it can be shifted to the following release for the fix, then the developer comments the status of the bug as “Deferred”. It is a postponed state.

7. NOT A BUG: If the bug does not impact the functionality of the application, then the status of the bug is selected as “Not a Bug”.

8. FIXED: When the developer takes essential actions on coding to fix the flaw then it alters the status of a bug as “FIXED” i.e. the defect will be eliminated from the application.

9. RETEST: Once the bug is fixed by the creator, then assigned to the testing team to test whether the bug has been repaired by the developer or not and the status of the bug as “RETEST”.

10. VERIFIED: The bug is rebuilt by the developer, likewise the tester retest the application, if there is no bug again it changes the status assigned as “VERIFIED”.

11. REOPEN: The tester will perform a retest of the application after fixing bugs by the creator. If there is a bug (either a recent bug or an old bug not fixed), then the tester assigned status as “REOPEN” i.e. once again it runs through the bug life cycle.

12. CLOSED: If there are no further bugs or problems in the application after performing a retest, then the status will be assigned as “CLOSED” by the tester.

In this blog, we discuss the defect life cycle in Jira in which a bug or problem can be handled from the preliminary stage to the fixing stage. JIRA was created to track and manage bugs in software development but it has broadened to enable sprint plan, teams plan, and track all elements of the software development cycle. The JIRA is mostly chosen by the IT organizations to manage the project and trace the status of software. It delivers a better adaptable workflow and prioritizes the assignments.

Also read: 5 Best JIRA Alternatives That You Should Know About!