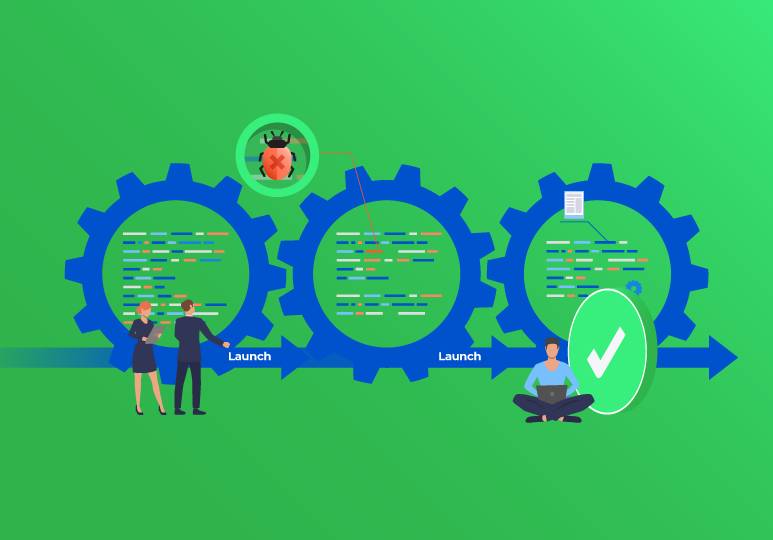 In modern development practices like Agile and DevOps, testers work in various test execution cycles to automate regression tests for reducing time, effort, and costs of testing. But testing doesn't even advance at the same speed as development. The most basic form of test automation is in-sprint test automation performance in which QA teams test 1 sprint behind is the development cycle.

Delays could occur due to many reasons including application availability, changing requirements, and limited time due to short release cycles. This often creates a barrier for testing at the speed of Agile/DevOps as QA continues to play catch up. To keep test automation from preventing timely releases, testers should adopt in-sprint test automation. Automating user stories at the unit, API, and UI levels define in-sprint test automation.

In this article, we have shared an effective in-sprint test automation performance in 2022 using different approaches at the unit, API, and UI level to give testing and development work in the same sprint.

You've all heard how time- and effort-consuming regression testing can be, leaving little opportunity for implementing innovation to gain a competitive advantage. Completing test automation within the constraints of a single sprint allows businesses to dramatically accelerate these repetitive processes, optimize test coverage, discover errors early in the development life cycle, simplify iterations, and gain a comprehensive perspective of product quality. Beginning an in-sprint test automation performance enables organizations to test constantly at the speed of DevOps while improving communication chances across the core teams' development, automation, and QA, allowing them to follow the same pace.

The adoption of in-sprint automation has its own set of issues:

1. Short sprints cause a lack of time to automate

In general, the QA team must repair identified faults within a two-week sprint. This may be insufficient for automation because it necessitates the involvement of both automation technologists and developers.

2. Selection of appropriate tools or frameworks

The toolkit should allow for the design and early generation of tests (logic description, business logic, a stable component of the requirements/application) without requiring access to the program UI, which is frequently susceptible to change. This method allows you to begin automating API and unit tests right away. As a result, the frameworks should enable a wide range of tests, as well as flexibility and the ability to adapt to changing business objectives.

Automation is a difficult undertaking that necessitates extensive technical knowledge from all parties involved. As a result, businesses should hire solution architects and work closely with technical teams to ensure the seamless design, setup, and deployment of in-sprint automation.

Only 1% of respondents to the World Quality Report 2020-2021 said they had no difficulties in implementing automated testing in Agile. Getting things done in such a short amount of time is only achievable when a complicated technique is used. We've compiled the most important QA ideas to assist businesses in achieving quicker time to market and superior software quality through in-sprint test automation.

1. Have the QA staff work closely with the business and the development team

In-sprint test automation performance in 2021 assumes that automating the entire scope is impossible. The appropriate tests should be chosen after extensive discussion and analysis with project stakeholders, who provide vital data on how frequently prospective clients will utilize specific features.

Another important part of streamlining testing efforts is constant and an early connection with the Scrum development team. For example, by pre-agreeing with software engineers on the IDs of UI components or API functions, QA professionals may begin developing automated tests even before writing the code for a specific feature. Developers work carefully on the discussed functionality, keeping in mind that it must be designed in a way that allows for future automation.

2. Write test cases in a straightforward yet relevant manner

When it comes to automating inside the same sprint, large test cases with very sophisticated flows may not be an option. By testing only one aspect of functionality at a time, utilizing specific methods and well-stated expected outcomes, QA engineers reduce the labor necessary for the preparation and focus more on the automation itself.

3. Use a hybrid test automation technique

Determining a layered mix for conducting test scenarios significantly simplifies the testing process, lowering the chance of mistakes and increasing the speed with which verifications are conducted. By employing API, QA engineers have faster access to the application UI, allowing them to bypass necessary stages in the automated scenario and reduce the time required to execute automated tests.

4. Incorporate automation into the concept of done (DOD)

By adopting automation as a full-fledged component of DOD, the entire Scrum team focuses on both its importance and reflects on developing bottlenecks or strategies that worked successfully to continually work on process improvements and achieve the intended goal.

The use of such methods allows for a high level of overall quality responsibility within your Agile or DevOps teams. Writing unit (TDD) or acceptance and subsequently unit (BDD) tests before functional code and automating them helps for transferring QA activities to the left, boosting test coverage, finding flaws earlier in the development process, and safe refactoring.

Proficiency takes time to develop. Things that appear to be too difficult at first become simple to do subsequently. Among them is in-sprint test automation. Businesses may achieve this mission-critical goal by developing a comprehensive automation plan that focuses on strong collaboration between the DevOps and QA teams, building simple but descriptive tests, automating judiciously, progressing DOD, and sticking to TDD/BDD.

Overall, these processes contribute to increasing release velocity, detecting issues early in the development cycle, and maintaining a quality mindset to assist businesses in going the additional mile and achieving continuous improvement.