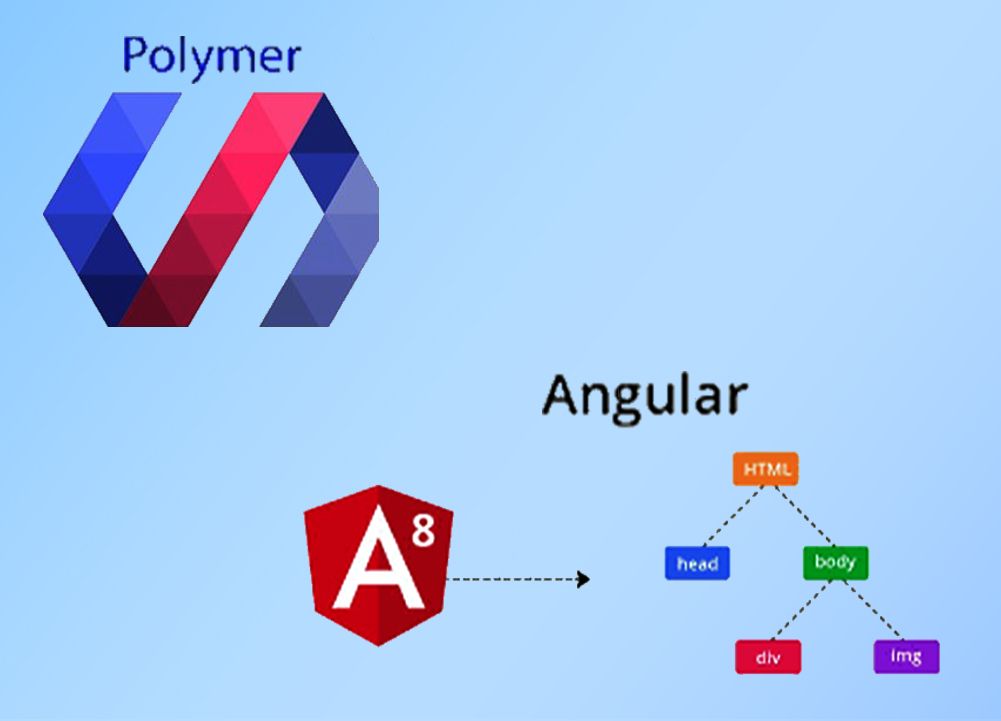 Polymer vs. Angular: 7 Point Of Differences That You Should Know

The internet has viewed the growth of a wide range of technologies that have brought drastic changes around the globe. Out of that, today, you will be talking about Polymer vs. Angular in detail. Developers are coming up with a list of libraries and frameworks for supporting rapid application development.

One such framework and library are Angular and Polymer. You can consider the comparison between Angular and Polymer in this new age of technology. In this article, we will be pairing polymer and angular. But, first, let us see how they are different from each other:

What is Polymer, and how is it different from Angular?

Angular and Polymer are both JavaScript-based frameworks developed by Google. A top-level AngularJS development company that could help you in building modern web applications. Angular is an application-level framework, whereas Polymer is a library for creating web components.

Why has Polymer become a go-to choice for developers?

Developers usually use Polymer for building web applications as it offers a very wide range of facilitating features:

Polymer vs. Angular: What do they offer?

On the other hand, angular offers high-level API for services, routing, server communication, and many other similar things. Today there are differences between these two. However, it is expected that these lines will be enabled if angular starts to leverage the components in the future.

Polymer vs. Angular: Let’s know which one is better?

Below are some mentioned points that show the comparison between Polymer and Angular.

Size of the web application

The size of the application affects the loading time directly. Additional fees also provide the size of an application. Therefore it is expected that the contribution from external libraries has to be minimum.

Angular: 566kb-766kb. The decreasing size of angular packages 566 KB indicates that the rxjs library has an accessible pattern to Angular.

Polymer: 237kb-268kb. Polymer is 127 KB, and it requires eebcomponents.js named polyfill for browsers. Nevertheless, it doesn’t support the components.

The pattern of components of a wide scope of reusability. Components are usually made of small pieces of code that developers use in multiple places of the same application or across different ones. lar: You should use support reuse and components and components only in Angular apps.

Structure of the application

In big applications, a coding structure is vital, and frameworks help.

Angular: Code structure dominates. Angular is a comprehensive setup. It provides how you may structure the application. It consists of integrated state management, application routine, and conveyance of data.

Polymer: No design. Polymer solely allows component creation. However, several have been constructed by the Polymer team that you may utilize for routing. The library provides a distinct information communication library. Redux or any Flux-based library may be examples. Angular wins because it defines the right application structure. However, this is not the case with Polymer.

When choosing a technological stack, the durability of frames/libraries is vital. Therefore, make sure that you don’t select an outdated framework.

Angular: You must modify apps to move Angular.

Polymer: The Polymer update gives a hybrid model that may be used and versions 1 and 2.

Polymer might be advantageous in terms of longevity because it allows both versions to run concurrently. But, unfortunately, you have to rewrite apps for Angular 2.0.

The difficulty of a learning curve

Angular: Because of the type-writing method, JavaScript developers don’t know the Typescript language. But the next JavaScript versions are the decorator’s notion.

Polymer: In ES5/ES6 JavaScript, you may enter polymer components. Because Polymer gives a simple-to-use synth over API web components, developers must not be fully familiar.

In comparison to Polymer, the learning curve is considerable. However, you can also work with Polymer if you know the fundamentals of javascript.

For SEO-friendly, fast ‘view-ability and social media review of the page, server-side rendering is important.

Angular: The team is working on Angular Universal. When used with Angular, it will allow server-side rendering.

Polymer: The server-side rendering functionality is not available.

Angular wins the fight hands of server-side rendering, while Polymer has no such feature.

If the style and feel of your application need to be personalized, Angular is fairly easy. It is used in bootstrap or Semantic UI with existing librarians. You may easily write global CSS to give your program a coherent design.

It isn’t easy to adjust with Polymer as it is meant to encapsulate Web components for their implementations. It implies you must specify CSS variables and mixtures in the components that you import. Therefore, third-party components are difficult to match the appearance and feel of your program.

Can angular and polymer be used together?

Yes, with Polymer Custom Elements in an Angular application, you can use the comparison between Angular and Polymer together. The web components include attributes, emit events, and may also include elements for children.

There is no ultimate solution to which of these Polymer JS vs. AngularJS can be better for developing a web application. But developers can use them, based on their requirements, in their app creation. We hope you had a great experience reading this post on Polymer vs. Angular and it will help any developer. Thank You!