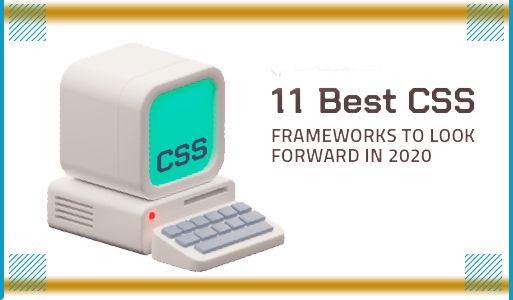 What Are The 11 Best CSS Frameworks?

There are two significant concerns for any front-end developer. The first one is time, and efficiency and the other one is browser compatibility testing issues. For addressing both concerns, it becomes essential to adopt a web design methodology that saves time and improves efficiency besides enhancing user experience. Speaking of which, CSS declares to be a win-win for both users and web designers.

Cascading style sheets or simply CSS are web designing tools used for distributing document content from document presentation. It results in an exciting reduction of the file transfer size. Once we apply the modification to the site’s CSS stylesheet, it could automatically reflect all pages. Excellent design consistency and an extensive range of formatting options provided by CSS.

Bootstrap is the most popular and holds the first position in our list for best CSS Framework for 2020. between web developers, Bootstrap has appeared as the leading front end Framework. It is the main reason for the recent rise in the demand for the framework. For enabling web developers to build various user interface elements, Bootstrap could be considered a combination of CSS, JavaScript, and HTML code. Bootstrap 4 is the latest version of the framework. It comes with new components, better style sheets, empowers our web pages to become more responsive, and assures that images become responsive in CSS.

ZURB created the Foundation in September 2011. In contrast with other CSS frameworks in 2022, the Foundation CSS framework displays an exceptional and complicated interface. One of its several price properties is the responsive menu and adaptability on various devices and browsers. We can also very easily style the menu according to our requirements by applying the CSS framework.

One of the most beneficial facts about Foundation is that it offers a lot of room for designers to show their creativity. The super responsive Foundation CSS framework allows designers to follow a design of the site themselves, which provides them with a sense of control over a project.

Materialize is basic by Google. Materialize-CSS is a combination of creative CSS and top-notch design aesthetics. It includes a library emphasizing a compound of several elements of JavaScript, CSS, and HTML. It claims responsive less and less browser adaptability measurement issues as the two primary design principles. Materialize is a combination of creative CSS and top-notch aesthetics developed by Google on the CSS framework list. If we are looking forward to building an allegiant user interface materialize, it includes plenty of custom CSS to help us achieve a unique website design. On the top, Materialize features an extensive category of color schemes that additionally create a one-of-a-kind website.

Semantic UI is one of the best CSS frameworks in 2022, developed by Jack Lukic. He is a full stack developer who utilized the natural language principles for creating the Semantic UI Framework. It is powered by jQuery and LESS; SemanticUI displays a sleek, smooth, and detailed Lok as it contributes to the lightweight user experience. Semantic UI has a relatively small community, but the members are very passionate and loyal. The primary purpose here is to design a language for sharing UI and permit developers and designers alike. The SemanticUI community has previously executed about 3000 plus themes.

Bulma is a flexbox of best open source and one of the top CSS frameworks in 2020. It is used by more than 200,000 developers all over the world. It helps developers in realizing how they could modify a segment. Even if we need a visual element, Bulma is here for our rescue. This frontend Framework utilizes different techniques for implementing frontend developers with a cohesive interface, besides thanks to the responsive templates that help us in focusing better on the content rather than worrying over the code the entire time.

UIKit is modular, lightweight and one of the best CSS frameworks. If we aim to develop a robust and past web interface, UIKit could be one way to go for us. The UIKit features a comprehensive collection of CSS, HTML, and JavaScript components. It makes the front-end Framework more extendable, simple to customize, and very easy to use. It is one of the most extensively used front end structures for the development of iOS applications. UIKit defines the core components such as buttons, labels, navigation controller, and table views. UIKit could become the future of developing apps on Apple platforms.

Pure CSS features a set of CSS modules considered ideal for different projects even though the body holes are tiny and very responsive. As a consequence, we could effortlessly build websites that are sensitive, faster, and aesthetically delightful. The credit for the construction of this top CSS framework belongs to Yahoo. Some of the platform’s salient features include a built-in design that offers high responsiveness and standard CSS, leaving a minimal footprint.

Tailwind as a utility first Framework, which we can use for rapid building of UI’s. It is a utility a CSS library that prefers practicality and speed over semantic and lean markup. All you need to determine entirely is the extent of your project. Based on that, it becomes straightforward to build an entire website without having to write our CSS. Tailwind does not come with the default theme, and we also won’t find any UI components built-in. But there is a pre-designed widget menu that we can work with for developing a website.

Ant Design is an element library for JavaScript library react JS. The acknowledgement for designing this front end Framework belongs to an Alibaba group owned Chinese company named  Ant Design. The great separates the screen area into 24 columns, increasing the customizability of the site visible to you. The complete collection of field and sketched icons are meant for fulfilling different app requirements.

Tachyons are developing CSS frameworks in 2022; unlike other popular front-end frameworks like Foundation and Bootstrap, we don’t get prebuilt UI components. On the opposite, it aims towards breaking CSS rules into manageable, small, and reusable parts ripping down the need to write CSS lines. Tachyons help developers in building great websites. In other words, Tachyons enables developers to create highly readable, fast loading, and super responsive interfaces without using heavy CSS.

Primer is a base coat of the world’s largest association of developers that is GitHub in the CSS framework list. The credit for creating this open-source tool belongs to some masterminds who share a passion for CSS and HTML. Prima possesses a systematic path that guarantees flexibility in styles such as typography, spacing, and color. The integrity of the Framework is one of the exceptionally main reasons behind its family growing popularity. Plus, the fact that GitHub maintains it adds to the trustworthiness of the primer.

It is very safe for us to assume that CSS for web design will last after all the frameworks mentioned above all have their own set of pros and cons. After our business circumstances have a significant impact on which we end up choosing. Depending on the specification of our project, we could select the CSS framework accordingly. We are also required to ensure that we perform cross-browser testing on different front end frameworks and ensure no browser compatibility testing issues.