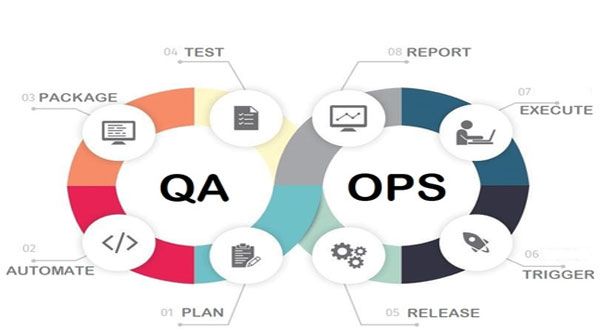 4 QAOPS Basic Practices To Be Implemented

Quality has become a massive emphasis when it comes to software development because it is what will please the customers. And evidently, satisfied customers are good for the company. With the DevOps approach making the software development process simpler and more effective, the QAOPS framework idea has now made its way to the industry.

As people from development teams and operating teams first started working together, someone had to say, “Why don’t QA and Ops work together too? “That’s what contributed to the creation of the QAOPS. So, in this blog post, we are going to clarify exactly what QAOPS are and how they make a difference in the software development process. Before you can understand what QAOPS is, you must know what continuous integration and continuous delivery are. Let us grasp those first, then.

What are Continuous Integration and Continuous Delivery (CI/CD pipeline)?

The CI/CD is the cornerstone of DevOps’ strategy. When you create an application and release its first version, you’ll see how it works. After the initial release, you will find that there are a few (or a lot of) things you can do better. Continuous integration is a process in which improvements are easily incorporated into the main branch of the application. When incorporated, automated testing can be performed to check their compatibility. You don’t have to wait for the release date to merge the changes when you do this. You can easily edit the changes. Continuous implementation is the next step to continuous integration. It is a practice to make updates available to consumers at regular intervals, thereby increasing the user’s satisfaction.

QAOPS refers to ensuring the consistency of software by approaching it with a DevOps attitude. You had to come across the word “DevOps.” DevOps applies to the development of software (Dev) and IT operations (Ops) and defines a partnership between development and IT operations. The goal of incorporating DevOps as a business practice is to strengthen cooperation between the two business units.

QAOPS is a practice to incorporate quality assurance (QA) into the CI/CD pipeline. This means that the software testing process should be incorporated into the CI/CD pipeline rather than an independent process. It needs the QA team to work closely with the development team and the operational team. Quality Assurance (QA) plays a crucial role in the development of quality software products. If it is possible to combine software creation and software operations, will it not be possible for companies to combine QA software and software operations as a business practice? This introduces a new flavor to DevOps known as the QAOPS framework.

Basic Practices for The QAOPS System

QAOPS resolves the most common conflicts between the research team and the quality assurance departments. Problems where the testers “expect” the problem to have been solved by the QA team and vice versa are removed by the QAOPS practice. QAOPS cooperates with the various divisions of the company. QAOPS uses the following high-level research practices to apply the QAOPS definition –

It is one of the key pillars of QAOPS architecture. Automation testing means testing with the aid of technology and tools, with very little human effort. Before designing an automation system, QA engineers must analyze the product in-depth and understand the requirements. Depending on the product and the actual stage of production, QA engineers will determine which tests can be effectively automated to help save time and test the functionality more productively.

As part of the QAOPS framework, research can be carried out quickly (in parallel with the delivery pipeline). Slowing down the testing effort would directly impact the distribution process. Running automated tests would certainly speed up the testing process, but not when performed serially. To overcome this problem, testing engineers need to create new tests at once (together) instead of running one after the other. Parallel testing requires greater hardware and infrastructure for more CPUs to run the tests at the same time. But the benefits of rapidly producing results without disrupting the delivery pipeline are certainly worth investing in a few CPUs compared to sales losses due to delayed product delivery.

After you’ve gone live with your web application, you’ll gather input from your users, focus on ideas, consider introducing new functionality to your upcoming sprints. After every release cycle, the web application begins to scale and scale the testing requirements! As for every new migration from the CI/CD pipeline, the ripple effect of new code changes over the already operating code must be measured and checked. And when it comes to infrastructure investment, you need to keep Scalability testing on your checklist.

The final practice for achieving the QAOPS structure is to make QA activities part of the CI/CD pipeline. One of the best ways to incorporate development and IT operations with QA is for developers to write test cases and IT operations engineers to identify possible UI/UX issues with the web application through QA team support. This offers developers and QA engineers the perfect opportunity to work together and get a good picture of the full QA process. It also does not mean that QA engineers will take their hands off these processes and remain idle. This cooperation between the various stakeholders just makes the whole process of production and testing more effective.

QAOPS, Continuous Testing in DevOps as we may also call it, certainly paves the way for faster product delivery when correctly built and implemented. This gives development teams confidence in the market for a quicker period without any quality sacrifices. Reiterating the same argument from above, bringing QAOPS into action involves a great deal of persuasion on the part of the business stakeholders. Once you’ve passed this point, it’s supposed to be a smooth sail ahead.