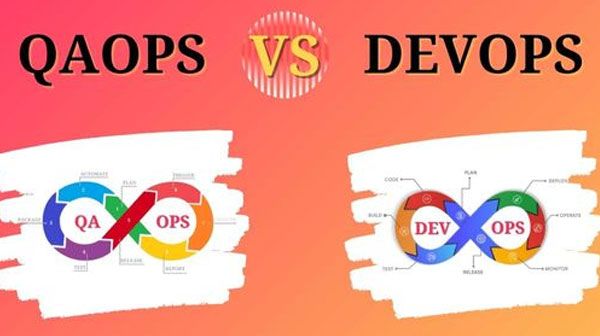 QAOps vs. DevOps: Differences You Need To Know

As quality is perceived to be the primary differentiator for a software product to be accepted on the market, stakeholders (management, developers, testers, and operations) have their tasks cut back. They must not only guarantee the consistency of the product at the time of distribution but must also keep it up-to-date while the product is being used by end-users.

This means following a continuous improvement and delivery cycle where everyone in the ecosystem has to be accountable for ensuring the quality of the product. This is where the difference between the two QAOps vs. DevOps is beginning to concentrate on reducing the time between creating a software product and letting the company know its benefits. This calls for improved coordination and cooperation between teams, namely production (those who produce and test the product) and IT operations (those who operate the product).

These products, in turn, are expected to deliver higher customer satisfaction, thus ensuring the success of the product on the market. And given the success of DevOps, a few variants have appeared, QAOps being one of them. In the QAOps system, QA (Quality Assurance) is incorporated into the CI/CD pipeline instead of the current silo-based process isolated from growth and operation.

Quality Assurance (QA) plays a critical role in the creation and distribution of a software application. It is reasonable that QA and Operations function together as a business practice. QAOps, therefore, focuses on optimizing the software delivery workflow and making it reliable, robust, safe, and faster. In short, it takes on the essential elements of continuous testing in DevOps, such as CI and CD, and puts together the silo teams.

While less common than DevOps, QAOps is fast emerging as a key technique to be followed in the delivery lifecycle. In reality, the QA team in QAOps holds the pride of the position that the production team holds in the SDLC. The advantages of using QAOps in DevOps are as follows:

As QA is incorporated into the distribution workflow, the end product is of higher quality than it would have been if the conventional approach had been used. As an integral part of the CI/CD workflow, where extensive automation is used, quicker outcomes are obtained, resulting in higher customer satisfaction.

With QA being more involved in the production lifecycle than ever, there are regular interactions with other teams. This means that the QA team is respected more in the organization, thus improving their morale and productivity.

When the QA team interacts with other teams (development and operations) as part of DevOps software testing, it helps them to widen their horizons and strengthen their skills.

As QAOps incorporates continuous checking, there is a higher degree of accuracy, stability, and durability of the device. This guarantees superior customer service.

DevOps is a blend of development (Dev) and operation (Ops) used to shorten the life cycle of systems development and to handle end-to-end processes that emphasize coordination, integration, and collaboration. It is a group of activities that integrate software development (Dev) and IT operations (Ops). It aims to shorten the life cycle of the systems and ensure consistent delivery of high-quality applications. DevOps complements Agile software development; many elements of DevOps in automated testing were drawn from Agile methodology.

What’re the differences between DevOps and QAOps?

While QAOps is a DevOps equivalent, there are a few differences between the two.

QAOps vs. DevOps: Quality at the centre

In DevOps testing services, cooperation is primarily between production and operational teams to ensure that the final product is free of glitches. Here, consistency or QA is part of the production process and plays a ‘secondary’ role in the broader scheme of things.

In the DevOps testing approach, DevOps specialists are primarily developers, secondary-level testers, and operating team members. Thus, even though the main thrust is consistency, the QA specialists remain in the background. However, in QAOps, the operating team primarily communicates and collaborates with the QA team to ensure the consistent delivery of the goods.

In this situation, QA is not subsumed by the production team but remains an equal stakeholder in the entire value chain. The end outcome of QAOps research is the continuous delivery of superior customer service.

QAOps vs. DevOps as in Cultural change

The key thrust of DevOps is to ensure that the program can be deployed at any time with new functionality in place. Here, each stakeholder can function as part of a single team working towards a common goal. DevOps calls for the Development and Operations Team to act as a single entity to generate business value through the value chain.

QAOps or Continuous Testing in DevOps tends to be the next logical step in the implementation of DevOps. It maintains the primacy of ‘efficiency’ in the SDLC and goes a step further than QAOps vs. DevOps in ensuring that the quality of the application remains top-notch continuously without sacrificing the speed of delivery.