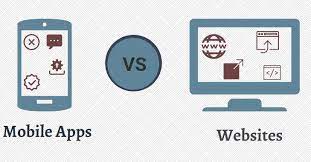 Testing a device program, such as a business network, is somewhat different from testing a smartphone application that could reach thousands of clients, if not millions. Testing a mobile application often entails applying test procedures to a range of contours and configurations, and thus includes numerous test methods.

We see that mobile apps are typically intended for greater numbers of users, more varied devices, and an increasingly wider range of communication than web apps, beginning with the most apparent difference between web application and mobile application. While discrepancies between these two types of computing apps i.e. web app vs. mobile app decrease as more web apps become available in mobile formats, with the growing sophistication of mobile device functions, the complexity of mobile apps continues to increase.

On multiple devices benefits of apps over mobile website, including a smartphone, tablet, smartwatch, heart pacemaker, lock system, or fitness tracker, a mobile application will run. As ‘stations’ web browsers were developed. Although mobile apps need to conduct ‘on-the-go’ computing functions constantly, web apps are typically based on stationary laptop or desktop operations, with the classic mouse, cursor, or Wi-Fi router operating characteristics that are non-existent or less primary in mobile apps.

You can, for instance, have it open on your desktop and your phone again. We don’t think signing out and signing back all the time is that normal anymore? People always want to be online and always be available. The increased exposure of mobile devices to consumer attention has led many consumers to establish a stronger bond with their mobile devices than with stationary devices and activities. Therefore, mobile app QA testing must search for such device attributes as:

The priorities, goals, concentration, preparation, and procedures for creating and testing mobile apps are customer-facing, even more than web apps. Thus, QA app testing faces the task of organizing and maintaining the level of quality of mobile devices that will meet consumer demands and expectations.

In terms of their general use habits and common device models, we can already see that there are some large differences between mobile app development and desktop app development. A more in-depth granular and technological viewpoint shows many places where there is a marked divergence between mobile and web testing:

Limitations on RAM and storage

Many handheld devices, along with relatively small 16GB SSDs, only ship with a mere 1 or 2 GB of RAM. These constraints impose severe limitations on RAM and storage capacity for testing operations, particularly concerning the vast quantities of memory and storage accessible by virtually any modern web browser. Besides, a mobile browser can be severely slowed down by networks like advertisement channels, so porting the web app to a phone or tablet can account for bottlenecks.

For more than 30 years, desktop/laptop input has been practically stabilized, with the mouse and keyboard combination still the norm for anything from browsing Facebook to playing a PC game. Further problems are posed by mobile apps. There are voice assistants such as Siri and Google Now, in addition to the broad range of touch gestures – swiping, pulling, and pinching.  Additional complexities to mobile operations are introduced through device-specific technologies such as hand wave gestures on certain Samsung headsets or the latest iPhone audio package.

With HTML, CSS, and JavaScript, a desktop web app is designed, with some variations depending on what frameworks a developer chooses to use. Mobile tech is not as simple. They can be constructed as native apps for mobile browsers (i.e. as mobile web apps) or as hybrid apps that could use special platforms to represent device APIs as web code-addressed JavaScript APIs. For all the complexities of testing styles, it is important to have a test management platform roadmap in place.

Conduct with and without connectivity

Without an internet connection, a web app running on a Mac or PC is going to be useless. Same for the Online Mobile App. However, a native or hybrid mobile app may have some offline features. Some games may be played without connectivity (although some features are missing) and when in airplane mode or outside in a remote area, document editors can still maintain functionality. As mobile app complexities grow, the question is how to find fundamental QA testing procedures with the potential to handle rapid mobile application innovation. The response may be to test the principle of design.

The activities of devices that are primarily programmed and structured to produce such results are assisted by each mobile app. All configurations, connections, interfaces, input, and output are centralized by a design principle within, or associated with, processing and outcomes. Understanding a mobile device’s conceptual framework is essential to understanding how to test mobile app functionality within its operations.

There is some difference, to be sure, between the web and mobile applications. Many mobile apps are at least partly web apps themselves, and with either type, maybe as part of an agile development cycle, you can also follow some of the same testing regimens and techniques. As you shape your overall testing strategy and look to account for the broad variety of workflows, inputs, and potential problems associated with smartphone and web applications, getting test management software is a crucial building block.