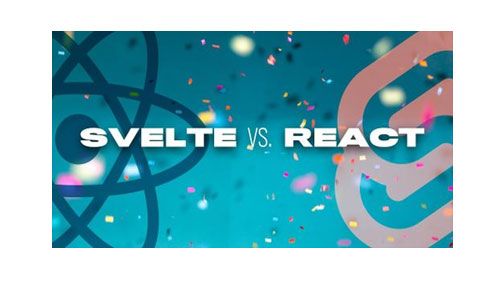 When should your company use React or Svelte? and how can you decide if React or Svelte is better for web development projects and business? In this article, we will be comparing the Svelte vs. React performance benchmark based on various parameters like performance, architecture, testing, user experience, and many more. Nevertheless, let's get started with an overview of both technologies.

Svelte is a JavaScript web framework that compiles and transforms user interface components into high-performance imperative code that updates the war between Virtual and Real DOM. It has a distinct advantage over other frontend frameworks that do virtual DOM diffing. You may use this tool to create user interfaces that are both intuitive and performant.

Svelte is a well-optimized framework that allows you to generate high-quality code while compiling. This reduces runtime overhead, allowing for quicker loading and interface navigation.

React helps web apps show information by contributing to the view layer. It's made up of components that, when the data changes, generate the underlying user interface. Internal React.js design is solid due to the continual interaction between a user's activities and the state of components.

Because Svelte is such a new technology, there is little to no information available regarding an application's architecture. However, there's no disputing that this framework is well-designed to process user inputs quickly. It functions as a compiler that renders the page using existing Javascript.

Test runners are provided by React.js to make the development process easier. Tools like Jest and Mocha, for example, follow a common pattern for performing test suites. This allows testers to spot issues in real-world browser settings, as well as superfluous functions and costly function manipulation. It shortens time-to-market, accelerates app deployment, and encourages a more productive workplace.

Svelte is for you if you like the notion of a "lean web." This framework is all about how your web application makes people feel and interacts with them. It has smaller libraries and fewer complex computations than other front-end frameworks.

External server-side rendering architectures like Redux and Flux, as well as SSR frameworks like Next.js, are all supported by React.js. Its ability to handle code makes it simpler to create sophisticated but interactive single-page apps, providing it with an advantage over competing technologies.

Svelte has not yet progressed to the point where it can create sophisticated web apps. It creates an app that is cybernetically improved. Other frameworks may have experience with input blocking events, but Svelte has yet to demonstrate proficiency in this area.

React has an advantage over other frameworks in that it allows you to create a user-friendly, ultra-fast application. Its rendering skills speed up the loading of online pages, resulting in a more pleasant user experience. Furthermore, the community and Facebook are both actively involved in the rollout of updates that focus on the functionality and integration of business logic. Facebook and the community

Because it makes it easier to create basic apps and functionalities, React has earned the reputation of being the quickest framework. You'll be able to launch your application effectively and quickly if you have a team that understands Javascript principles, the router system, and configuration limitations. Short-term goals are more likely to provide positive results.

Svelte offers a great data structure for creating database-driven and functioning apps. It enables developers to create more complex features by decoupling the design HTML markup from the application structure. This distinction between front-end control and functionality, as well as an orientation

React is only a library, not a complete frontend framework. So, from that standpoint, it should produce smaller apps than comparable frameworks, yet React's app sizes are larger in comparison. The latest React versions, on the other hand, have reduced the overall bundle size by 30% compared to the previous version.

Svelte develops tiny apps, making them the most accessible among Javascript libraries for more productive development.

React employs a component-based design that focuses on creating UI components, customizing the user experience, and making the most use of logic to provide meaningful functions. It allows you to create useful and unique code snippets that may be reused across several apps and modules.

Components are used to build Svelte applications. It offers a comprehensible structure for defining various app components. A web application, for example, contains several tiny components such as buttons, text boxes, forms, and so on. It brings all of the parts together, providing consumers with a uniform experience and developers with a legible structure to maintain it.

The learning curve for React vs Svelte

For developers who are familiar with Javascript API architecture and data flow, React is a breeze. This makes it easier to grasp the React process and architecture, reducing the learning curve for newcomers.

Svelte offers a simple learning curve that doesn't require any prior knowledge of Javascript or typescript. JSX is not an impediment. Building applications with Svelte requires reusable components with individual HTML, CSS, and Javascript code.

Because Javascript specialists are more likely to be interested in developing online apps, hiring React developers is easier than ever. Although the average cost of hiring a React developer is $34 per hour, it can range from $50 to $100 depending on the developer's abilities, experience, and occasionally location.

All that is required of a Svelte developer is a thorough grasp of HTML, CSS, and Javascript. As a result, finding them should not be a difficult process. Svelte developers pay between $20 and $40 per hour on average, whereas frontend developers cost between $15 and $50 per hour.

Both React and Svelte are component-based frameworks. Svelte vs. React performance benchmark both are built in a distinct way to display material to users, or in other words, to render pages. The former uses a middleman to update data digitally and refresh the UI, whereas the latter processes and displays data simultaneously while generating the code.