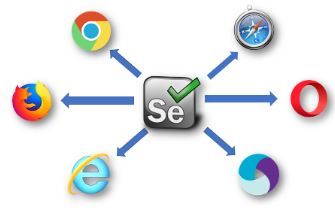 Selenium is an open-source test framework that is used for automating the actions of the product under test. To understand it, selenium automation testing makes web browser to behave like a user while allowing us to write tests of recent different programming languages, including Java, Ruby, PHP, Python, C#, NodeJS, etc. Selenium Grid-based tests are ideal for testing different types and versions of web browsers.

The Selenium Grid is a very popular record and playback testing tool used for automated browser testing. It makes it very easy to get started with automation testing as IDE is an uncomplicated turn-key solution web-ready and works out of the box.

What is the need for a Selenium grid?

As we go through the entire selenium WebDriver tutorial, we will find out that WebDriver is going to execute in our test automation tools cases on a single machine.

Here are a few problems with such a setup:

As we will proceed with the selenium course, we will obtain an idea about overcoming the Selenium grid’s problems. The grid structure is based on master-slave architecture as the master machine distributes test cases to different slave machines.

So before getting started by performing selenium automation testing, we are required to install a few dependencies for side runner:

A side runner is a command-line tool that lets us run a .side project on a Node.js platform. Automated browser testing could be performed in parallel by using a side runner, including the number of parallel processes that have to be completed. The w option is used for controlling the number of parallel processes that are running as we will perform automated browser testing on a cloud Selenium test grid.

As automated browser testing is performed on a Selenium automated testing grid, there is no requirement for installing the browser drivers on the local machine from where that test automation tools would be executed.

Exporting the test from Selenium IDE

For the display of administering tests on the Selenium test grid in this tutorial, we will create a test suite that comprises four test cases. The test cases are recorded by using the Selenium ID plugin for Google Chrome. If the project is saved, we will navigate to the test suites available in the left side panel.

For enabling parallel testing in this Selenium IDE tutorial, we are required to right-click on the test suite and navigate to settings. In the settings window, we will enable tests in parallel as it is very important to know that parallel testing on the cloud Selenium grid only runs when the tests are performed using the side Runner. He will save the side project to be executed using the side runner for this Selenium IDE tutorial.

We are performing the test on the Chrome browser for Windows 10. The Selenium test desired capabilities generator will be used for generating capabilities. We can choose any language as the common cross-browser configuration satisfies the side runner command. Here are the desired qualifications used in this Selenium automated testing IDE tutorial for the required test combination in python language:

Specify the number of parallel processes

For utilizing parallel testing for this Selenium IDE tutorial, the –w <n>, (or –max-workers <n>) option is used to specify the maximum number of workers that will run our tests.

Rather than remembering all the command line arguments that have to be passed for test execution, aside, a runner option is also in the offing by the side runner. The runtime parameters could be stored in a simple configuration file. There are two alternatives when it comes to configuration files in Selenium IDE:

The side Runner look for a configuration named .side.yml. by default. The expired capabilities and server features used in the earlier test could be moved to .side.yml. We will place the file in the same folder where the dot side project is present. If we still want to ignore the context of the file and use the command line arguments, we could use –no-sideyml along with the command triggered from the terminal.

There is also an option to designate the runtime parameters in a custom YAML file. The custom configuration file’s location and name are required to be specified using the –config-file option. When the flag has used the default .side.yml even if present will be ignored.

It is advisable to use Selenium Grid when you have to perform multi-browser testing and you have a large number of test cases. Automated browser testing with Selenium IDE has proven to be much more effective as IDE could be used to execute automation tests on Selenium Grid. As a side runner supports parallel test execution, it empowers a cloud Selenium Grid‘s parallelism feature.

Default and custom configuration files make it very easy to perform automated browser testing on Selenium Grid online as we are no longer required to specify the configuration parameters and the browser capabilities along with the side runner command.