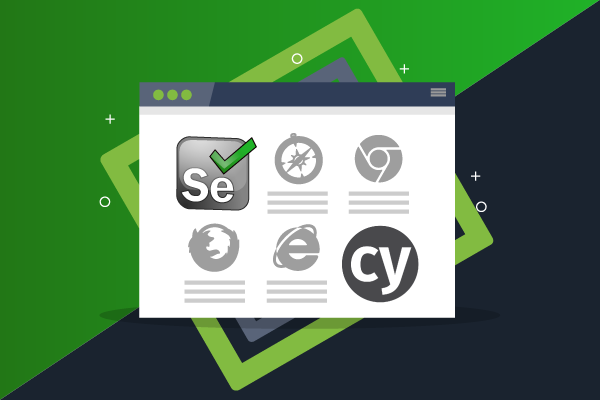 Comparing The Selenium And Cypress Testing Frameworks In 2021

Automated testing for web apps has been around for over a decade. For much of that time, Selenium ruled to be supreme as the go-to testing framework for any type of testing need that involves a browser-based app. But as the world of test automation is evolving new were to have emerged.

The chief among them is Cypress, a testing framework that is becoming a popular alternative to Selenium. Is Selenium vs Cypress a better choice for a tester’s automated testing requirements? In this article, we will be Comparing the Selenium and Cypress Testing frameworks along with their on why you might want to select one or the other or even use both at the same time?

What is Selenium testing?

Selenium is a test automation framework that uses a protocol known as WebDriver for automating software tests within a web browser. using Selenium you can inject a command into an application that has recorded the application response. By writing scripts for sending commands developers can do automatic tests for identifying performance and reliability issues in software.

Because Selenium like most other test automation frameworks can emulate user interaction with an application and it is a great tool for testing software before it is deployed into production. In other words, the framework helps developers in identifying problems without having to wait for feedback from the real user monitoring tools.

Selenium can support all major web browsers although its browser has a separate automation driver that indicates you have to configure different test environments for different browsers that will increase the effort required to set up Selenium. Selenium also supports that Jyoti of the programming languages used for the web today including python, Java, C#, JavaScript, Ruby, PHP, and Perl.

Selenium is the oldest automation framework that is still used by many developers. It was developed in 2004 by Jason Huggins for helping to automate software tests at ThoughtWorks the modern version of migrating selenium to cypress relies on the web private protocol and appears several years later.

What is Cypress testing?

Cypress is the newer testing framework that uses web and browser API for driving test automation. Like Selenium Cypress can also be used for injecting commands into web applications and evaluating how applications correspond. Besides, the way Cypress works is different from Selenium in various essential aspects.

For one, instead of using a software library like WebDriver, Cypress depends on the native web and browser API for interacting with web apps. This makes Cypress easier to set up with a trade-off that it only supports testing apps written in JavaScript. It cannot send demands to applications written in a wide variety of languages as Selenium can. It also supports certain browsers but it only supports Chrome. Firefox and edge support added with the Cypress 4.0 release in 2020.

Another essential difference between selenium and cypress is that Cypress provides only limited support for testing the mobile apps and works only with apps developed with Ionic. In contrast, Selenium can test any type of software via Appium that is an android and iOS testing framework. According to historical perspectives, Cypress is newer than Selenium. Development using the Cypress testing framework started about 6 years ago and the framework will achieve its 1.0 in 2017.

Cypress vs Selenium: How can you decide?

Selenium and Cypress are both reliable test automation frameworks. They both happened to be open source. So why should you choose one over the other?

Selenium is the most prominent choice for the many use cases.

Reasons to use Cypress

Cypress is a better choice can the following:

Consider the sorts of groups that each caters to while thinking about the distinctions between Cypress vs Selenium.

Cypress is primarily aimed at front-end developers who wish to build tests for the programming language they're most likely to use – JavaScript – without the complexity and overhead of Selenium. Selenium, on the other hand, is aimed towards QA professionals who are ready to devote time to understanding the ins and outs of the Selenium platform and building sophisticated testing environments.

This isn't to argue that Cypress is exclusively for programmers and Selenium is for quality assurance teams. Either group can utilize either framework. Cypress is a better match for more conventional teams that aren't attempting to merge development and QA jobs, whereas Selenium is a better fit for more traditional teams that aren't trying to integrate development and QA roles.

Use Selenium and Cypress together

Also, there's no reason why you can't use the difference between selenium and cypress at the same time. You may use Cypress for quick and simple JavaScript tests while using Selenium to fill in the gaps left by Cypress.

We took a close look at two leading companies, Selenium and Cypress, to see how the rising player (Cypress) is proving its worth in the online automation testing industry. Cypress has several advantages over Selenium, including automated scrolling, real-time reloads, time travel, top-notch execution speed, and more. Migrate selenium to cypress has capabilities such as remote execution, cross-browser testing, and the ability to write tests in a variety of programming languages.

Comparing the Selenium and Cypress Testing frameworks, it is suggested that you select a tool that matches your project's requirements, skill levels, and other factors. Consider the long-term implications of your decision and select the finest tool for the job!