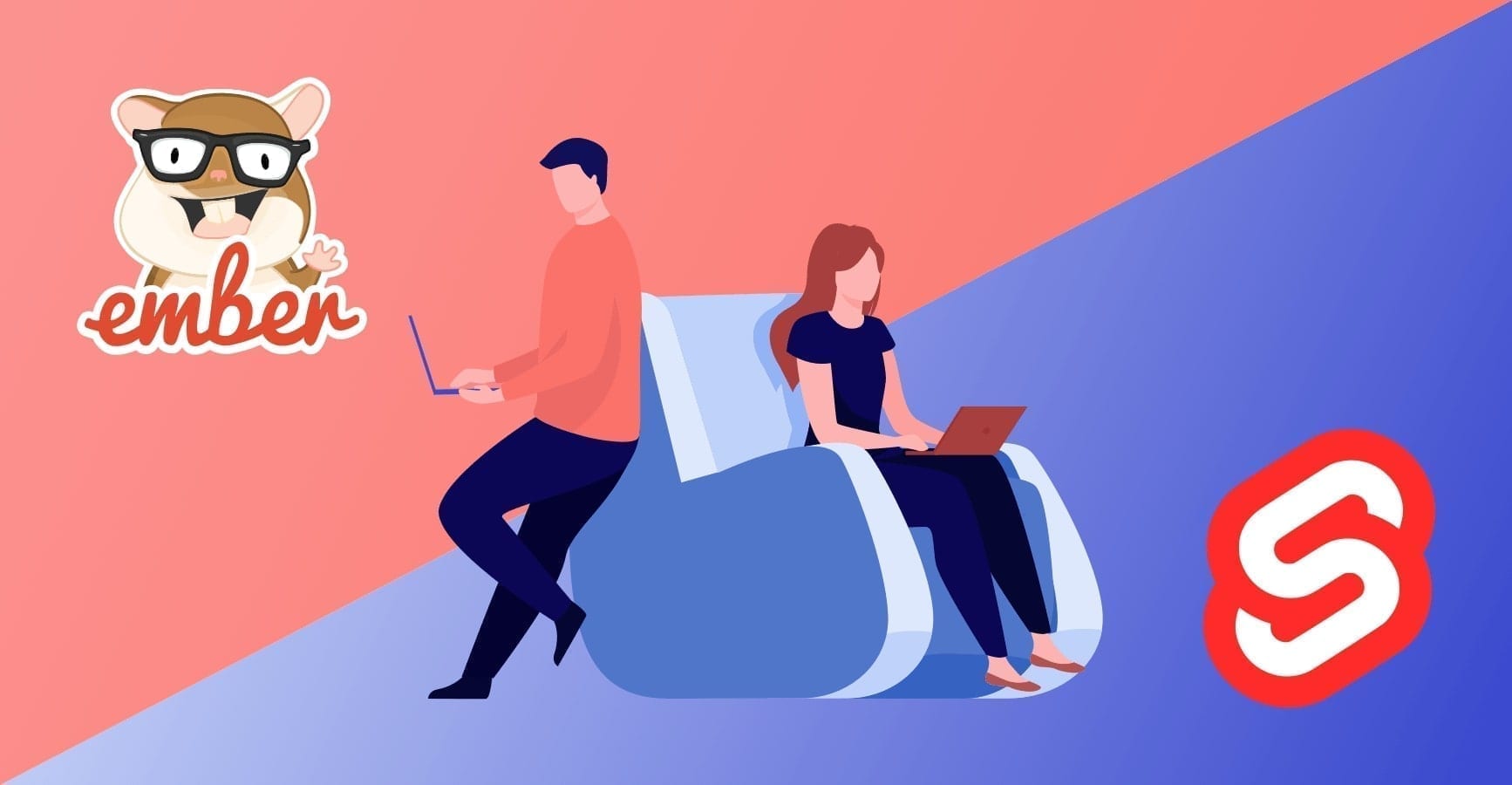 A web application provides usefulness for users to access mobile features on the bed platform. It offers a great experience for interaction and the choice of a front-end framework that determines the design, logic, animation, and behavior of the application. It is a front-end development project that requires a new approach for rapidly building an innovative user interface. For achieving expected goals, the selection of the right web app framework is essential.

Ember vs Svelte are both JavaScript web frameworks, but they are very different in terms of capability for building simplified feature-rich web apps or complex web apps. If you are confused about choosing the best between these two, then this article is for you.

Svelte is a JavaScript web framework that doesn't do virtual DOM diffing. Advantages of Svelte include compiling and converting UI components into highly efficient imperative code that directly updates the DOM. Thus, it will allow developers to build an integrative user interface with good performance characteristics. In simple words using Svelte, you will write components using HTML, CSS, and JavaScript. Then during the development process, the framework will compile them into small and standalone JavaScript modules. By doing this, you will be ensuring that the browser does as little work as possible that will make your web faster and code simpler.

Comparison between Ember vs Svelte

Below is the comparison between Ember vs Svelte:

Here Ember and Svelte is compared on the basis of learning curve:

This framework has a steep learning curve as the MVC pattern is not very difficult to learn and understand. Instead, it follows complicated standardized patterns for adapting functions and tools. In the initial stages, someone may find it challenging to learn. Ember's present documents are not horrible, but they don't make them easy for newcomers.

It is very easy to learn and doesn't require any prior knowledge of JavaScript code to extract typescript knowledge. However, building apps using Svelte reusable components with individual HTML, CSS, and JavaScript code are fundamentals.

Here Ember and Svelte is compared on the basis of architecture:

The old version of Ember follows the MVC architecture pattern. So first, let have a look at MVC:

Model: it provides objects and elements of the app to rap database records very quickly.

View: this component functions as a template that uses templating languages like handlebars. Ember may simply insert data into the application view section dynamically using his manner of structuring.

Controller: comparing two frameworks that route handlers deal with controller tasks like getting the data and passing the Vue components. The new version of Ember works with the architecture of component service and, in some cases, for providing asynchronous functioning and handling multiple processes concurrently.

Any information in the official docs concerning the architectural aspects of applications built with Svelte is not available. This framework is designed to interpret user-interface inputs rapidly. It acts as a compiler for rendering the page with JavaScript. It will eliminate the intermediate steps of loading a virtual structure before reflecting data into the real user interface. Svelte makes the process much faster by serving the content to the users relating to this component.

Here Ember and Svelte is compared on the basis of development:

It is a server-side rendering-oriented framework that provides tools, plugins, and external dependencies needed to construct a sophisticated or advanced application reasonably. In addition, Ember now utilizes the MVC paradigm to enable components to access DDAU and thus makes it easy to develop large-scale apps.

It is not at the stage of building complicated web applications. On the other hand, svelte produces improved apps cybernetically. Other frameworks contain records of input blocking events; however, Svelte has not been ideal in a given domain.

Here Ember and Svelte is compared on the basis of performance:

Performance is the key aspect not only for major projects but also for small projects. And when creating complicated and massive projects, it becomes most significant. For example, to compare the performance of Ember vs Svelte.

It is recognized for its sophisticated tools and components that often favour large-scale projects. This complexity facilitates the management of sophisticated application functionalities but lags behind the startup of the program. As a result, it takes a few seconds before it can be smoothly operated.

Svelte is a well-optimized framework from the development point of view. It gives significant flexibility in producing good quality code. It optimizes the user code at compile-time, which means that apps do not run long enough to take advantage of extremely quick loading and UI navigation. Svelte makes cheaper attempts to achieve app performance than other frameworks

It offers a wide range of tools for creating scalable applications. The MVM design offers flexibility without jeopardizing the core functionality. It enables large data codes to be simultaneously rendered with high efficiency. Simply, it offers scalability, which is also beneficial for the development or extension of huge programs.

It is not the best solution to build scalable applications. However, because you may use it in connection with other frameworks, it is speculated that it might help construct scalable and reusable components.

It helps developing companies to construct tests so that code reworking may be faster and easier quickly and automatically. Simply put, Ember doesn't need manual testing. It provides test tools like DOM, Mocha, and Chai DOM. The finest aspect of Ember is that the CLI recommends testing you should perform based on the application software.

Svelte is more about contributing small-size libraries and less complicated computations. In Svelte, you can create more testable code than any other framework because the frontline is how users experience and interact with your web-based application. By creating testable code, this framework is more business-friendly.

The safety measures are followed by the requirements established by intersite falsification tokens.

This CSRF ensures that Ember apps may be protected from attacks like cross-site scripting and content security assaults. Ember has a harsh security policy established, enabling the application guides to prevent threats like XSS automatically.

No requirements for security updates and rules are stated till today in the Official Svelte Document.

Both Ember vs Svelte have their own sets of strengths and limitations. The learning curve can allow businesses to identify the time frame that developers need to know. When selecting a framework, businesses must understand the problem better and predict if developers will need help for training or time for the framework before working with it.