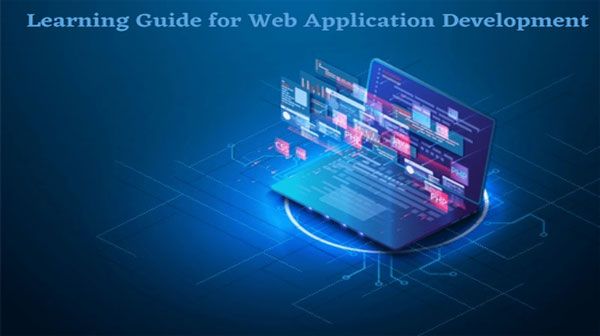 Technology is wired around our lives so well that we can’t imagine living smoothly without it. It has become the need of the hour. From extremely intricate android apps to the software on your laptop, all of this is cocoon inside the layer of web application development. Every website that we encounter with one search on Google is a result of absolute web development supporting it in the backend. But the question is what is web application development?

To someone who doesn’t belong to this background might feel as if it is some magic that hundreds of sneaker designs pop up on your screen when you are looking just for one. Rather progressive app developers tell how fascinating it is to work in this industry. Just like them who won’t like working as a backbone of a clothing or food service website instead of simply being a customer.

We have compiled certain steps in this guide that might give a direction to the beginners of what to take the next step in their journey of being a web application developer. The guide would answer the following questions for you-

What is a Web Application?

A web application or a web app is an interactive computer program made using the technologies like JavaScript, Cascading Style Sheets (CSS), and HTML5. The final progressive web app is accessed using a web browser like Google Chrome or Mozilla Firefox and often has a login or sign up mechanism.

What is Web Application Development?

Web Application Development is associated with developing an extremely progressive web application that stays on the server and gets delivered to the user over the Internet. It focuses on interacting with the browser rather than simple engineering processes. This way the applications aren’t supposed to be downloaded every time they are used, instead they could be accessed through a network easily.

Major web app examples include setting an objective to find a solution, finding an approach to reach its solution, using a particular framework or tool for the same, and finally building the web application. The main purpose of a progressive web application is to interact with the users iteratively.

The end-user or the client can use this web application using any web feasible browser like Google, Mozilla Firefox, or Safari. A website’s functionality is always powered by strong coding and programming skills. From static web pages to transition based websites like social media handles are all the result of the sheer expertise of developers.

The web application developers have divided this process into 3 layers:

Front-end or client-side scripting is what the end-user deals with directly. It is the most crucial stage of web application development because it demands absolute minuteness due to the direct involvement of the user. The code on the client-side is executed on the web browser and relates to what people are seeing on that website. It could be the layout of the page, font of the content, type of content, colors, and illustrations used, or contact forms used.

All these features are taken care of during the client-side scripting. Absolute expertise in this layer can help in a very progressive web application development.

Backend development or commonly known as Server-end scripting tells about what is happening behind the scenes of the website. It is an essential part of web application development that is usually overlooked. It takes care of all the important data that is being used in your application and makes sure it is structured. It stores the data and organizes it as well so that the front-end runs smoothly. It sets up a communication channel with the front-end to grasp all the information about the data.

Whenever any activity is performed on the client-side, a request is sent to the server-end to which it responds. This response includes some relevant information in the form of client-side code so that the browser can interpret it and display it on the screen. A smoothly running backend gives the best experience to the user while he uses any progressive app.

Database technology is something that websites rely upon the most. Database is basically a store which contains files and other content relevant to the website. It makes the data easier to manage, retrieve, edit and save. It runs over the server and most web application development processes use a relational database management system (RDBMS). RDBMS is a system that contains tables of entire data in the form of rows and columns.

All the 3 – the frontend, the backend and the database technology assemble together to make a progressive app run smoothly. These layers are the basic foundation of the web application development process.

Who is a full-stack developer?

A full stack developer is the backbone of the entire web application development process. The ‘full stack’ here integrates the front-end and the back-end. These developers are known to be expertised in the entire web development process. From the initial problem discussion phase to the end deployment phase, they are aware of every bit of this journey. They are known for acquiring the best strategy planning abilities and owning well-equipped hands over all the latest technology.

They also specialize in mobile app development. Their ability of designing progressive apps for iOS and Android shows how well versed they are in assuring efficient user experience and business logic.

What are the programming languages used in web application development?

Some of them are mentioned below to have a look upon and get an insight about the building blocks of any website.

Markup Languages helps in formatting a text file. In simpler words, this language shows the entire text of the software in a text file format. Not only it displays the text, it also allows to format the text. Two widely used markup languages are HTML (Hyper Text Markup Language) and XML(Extensible Markup Language).

HTML contains tags that describes how the document would look and in what manner the entire content such as text layout, images, media, tables, etc. would appear on the web page. A progressive web application always ensures the best use of markup languages to make a more interactive layout.

Programming language is used to assist the computer so that it generates some output. Often referred to as ‘high level languages’, these languages help is writing the source code of the software or application. They use certain symbols and logical words to make it easier for humans to code.

The well known programming languages used widely in web application development are C++ and Java. After the code is written, it is saved in the text-based format that only humans can understand. Being high level languages, they first need to be converted into low-level languages i.e. a machine code which the computer will understand.

The other types of programming languages are interpreted languages. Perl and PHP are the biggest examples in this category. They could only be run through an interpreter which is a program used to execute a source code. These are used to generate dynamic websites.

As discussed earlier, databases are used to store a large amount of data. Just how Instagram stores your ‘Saved’ posts in a separate section, similarly the entire data of a website is saved in files in the form of tables. Every time the software would be updated, the database gets updated too.

SQL i.e.  Structured Query Language is the best used database language used in the web application development process. It contains certain queries which when written in the command line prompt and allowed to execute, it modifies and updates the entire data the way we like.

For writing SQL queries we can also use database servers such as MySQL, Oracle, DB2, etc.

A style sheet is a set of stylistic rules often used to style the documents written in various markup languages. CSS (Cascading Style Sheets) is a widely used style sheet language. Any document written in HTML could be made more presentable visually with the help of CSS. It has various color options, font options, background insertion, borders, margins, table formats and other style formats. It makes a web page more responsive and ensures a better user experience.

What are web application development frameworks?

The well known frontend frameworks like React, Vue and Svelte are the JavaScript libraries used to create user interfaces. React has a very robust framework and assists large scale projects only. Vue is considered thinner than React and used for medium scale projects for smooth functioning. Svelte is the most recent framework in the market and is more like a compiler. It is tinier than React and Vue but yet rising to soon become apt for progressive app development process.

Below are some of the web app examples that are widely used by the end-users and provide them the best experiences with their services.

This widely used progressive web application was built in 2012. Since then it is used a lot for building, saving, modifying and deleting records. It is also a mobile application now.

Salesforce being a CRM proves to be the number 1 SaaS product in terms of revenue. Its complex nature doesn’t make it any less interactive for the users worldwide. Its multiple facets include report, table and dashboards.

Airtable is considered as an ‘Online Excel’. It combines added layers of specialities making a very sturdy database. Its functionalities are complex yet it is used widely internationally.

Where can we learn web application development?

For getting an expert at web application development, you might need a little guidance via some study courses. There are a few mentioned courses offered by various educational sites that might help you reach your goal of becoming a full-stack developer.

feeCodeChamp is an online coding bootcamp, It is non-profitable and completely free. It’s the best option for beginners and also for those who are not sure if they like  coding. It’s completely  risk-free and has no pressure.  They have an incredible curriculum with an extensive built-in coding environment.

The very famous online learning platform Udemy contains tons of learning courses within. The one that is best for web application development and will help you build your own progrssive app is The Advanced CSS and Sass course. It is a paid course.

Team Treehouse is an online learning platform that is video based. It has multiple tracks to follow. Treehouse isn’t free, but they have various monthly and yearly plans depending. You can check out the  free 7-day trial plan or $100 off of 1 year of their Basic Plan.

After following this entire guide thoroughly and practicing yourself at a well verse level, you can assure yourself to be an expert at web application development. It is not a very tough job to be one but it requires practice and consistency. One you gain a good grip at coding and logics, progressive web application would be just another task for you to do. Therefore start with the basics of coding and slowly you would find yourself growing as a fluent full-stack developer.