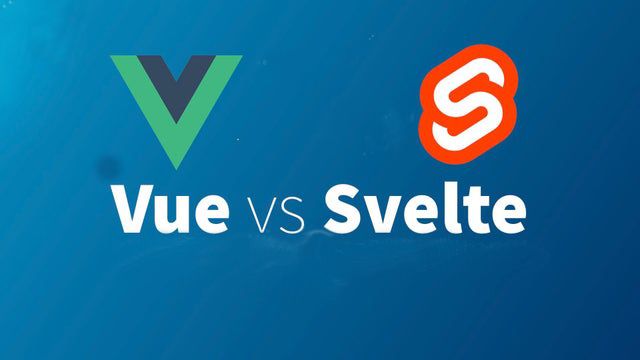 If you often get to work with frontend developers for client-side web app development you must have a familiarity with Svelte vs Vue. As it is new to the tribe it reduces the requirement for virtually representing JavaScript objects and then displaying them in the user interface. It generates intelligent code that integrates JavaScript in the runtime and saves extra time loading.

While Vue is known for its capacity for building complex user interfaces it does have virtual Dom as a metal process before updating the UI. Still, it is an improved version of previous JavaScript frameworks. For knowing which framework is head or suitable for your requirements here is a comparison between Svelte and Vue.

Vue is a lightweight and flexible JavaScript-based framework that provides high-level web tools for developing modernistic SPAs and front-end web apps. It is also considered a very versatile and progressive JavaScript framework as it allows change creation in the application code without influencing any core features print and it provides the opportunity for creating progressive UI.

Svelte is a JavaScript modern framework that doesn't do virtual DOM define unlike other JavaScript frameworks used instead it compiles and converts UI components into highly efficient comparative code that directly updates the DOM.which features lets developers build the intuitive user interface with excellent performance characteristics.

Difference between Svelte vs Vue

Here are the major differences between Svelte and VUE:

Svelte: It is a very well-optimized framework from a developer's perspective. It offers excellent flexibility for producing high-quality code that just performs awesome. It also optimizes its user code at compile time.

Vue: With each new feature added or expansion of a component, the condition of the Vue Application becomes uncertain making it harder for the app to read faster. But fortunately, this framework has a virtual DOM that serves as the default tool that helps in optimizing the performance of an application.

Svelte: There isn't any useful information about the official documents regarding architectural aspects of applications built using Svelte. Under the hot svelte is excellently designed for interpreting quicker user interface inputs.

Vue: It focuses upon following the view model approach and undertakes the pattern on MVVM especially in the cases of developing a large-scale application. The view part and the model part are connected in a two-way binding approach. The M, V, VM stands for model, view, view model.

Svelte: If you are more inclined towards the lean web idea svelte is about your liking. It is safe if you say that svelte is more about contributing to small size libraries and less complicated computations. By considering this pattern you will be able to write more testable courses in svelte than other front end frameworks as the front end is more about how users feel and interact with the web application.

Vue: Vue is still a rising star and its abilities are ordinary but simple yet efficient. It doesn't offer any over the top luxurious tools as well as doesn't undermine the testing capacity of its code as well. Unit testing of the UI is very close to other frameworks and typically uses Jest, Mocha, or Chai.

Svelte: It isn't yet the stage of building complex web apps. Svelte is built cybernetically and has a tab and you will be fascinated after seeing how svelte processes the components in user interfaces.

Svelte: Aesthetically svelte is building a smart UI framework to stop the aesthetics of its features, syntax, and framework architecture 8 into the positive and powerful and user experience. It is welcoming for solving problems of scaling but applications that accept volunteering contributions worldwide.

Vue: For developing an interactive and eye-catching web at UI, Vue might be an ideal choice regarding the tech stack it offers. Virtual DOM ensures that changes made within the application don't directly reflect visually which provides more scope and room for UI design experimentation.

Svelte: Here the removal of additional code compiling takes place. Before the final user interface is shown, Svelte removes the requirement to compile the codes.

Vue: Creative applications are enormous, but it's preferable to create them faster. Given Vue's light design and rendering characteristics, it is easy to create applications at a rapid speed.

Vue: As said, Vue is a lightweight framework, which itself shows that the application size may not be as large as other frameworks. A basic simple Vue application has not many dimensions, between 50kB and 100kB.

Svelte: Svelte follows the contemporary development of applications. Each Svelte-built application consists of components and the app itself is a unique part. Svelte manages the code by allowing these components to remain separate while maintaining decency and working seamlessly.

Vue: Vue still grows and how well it will be in the future is not possible to predict. Will they overcome their language problems in the community and assist them? Probably from now on, Vue is growing more rapidly in comparison to most long-term frameworks.

Svelte: Svelte has a curve that is easy to understand. There is no need to have previous knowledge of javascript code or another typescript. JSX is no barrier. The framework may also be supported by developers who are somewhat introduced by Javascript.

The framework may also be supported by developers who are somewhat introduced by Javascript.

Vue: Vue is the easiest to comprehend and learn from all the frameworks of JavaScript. It is believed that between a few hours and less than a week it may be learned. All that is necessary is a basic grasp of how ES6 works and essential abilities in JavaScript programming.

Svelte: Since the most important expertise needed for Svelte apps are HTML, CSS, and Javascript alone, it should not be scary for your company to hire Svelte developers. The average cost for engagement ranges from US$20 to US$40, whereas typical costs range from $15 to US$50.

Vue: Vue is easily learned, however, the availability of developers familiar with Vue might be relatively much fewer when it comes to comprehending the depth of Vue ideas. This framework resumes the complexity of the internal code with its basic design and feature flexibility.

Svelte: To this date, there are no listed prerequisites in the official Svelte document w.r.t security updates and guidelines.

Vue: Creator of Vue, Evan once himself claimed that "Built-in sanitiser adds unnecessary weight to a bundle for a rare use," so it's impossible to automatically defend Vue programs against attacks such as XSS or any other vulnerability assaults.

The Svelte vs Vue Javascript modern frameworks reduce market time and enhance library support and code reusability. Their comprehensive ready-to-use environment makes it the best solution for quicker app building. Moreover, Svelte and Vue not only enable fast development but also minimize the cost of a project.