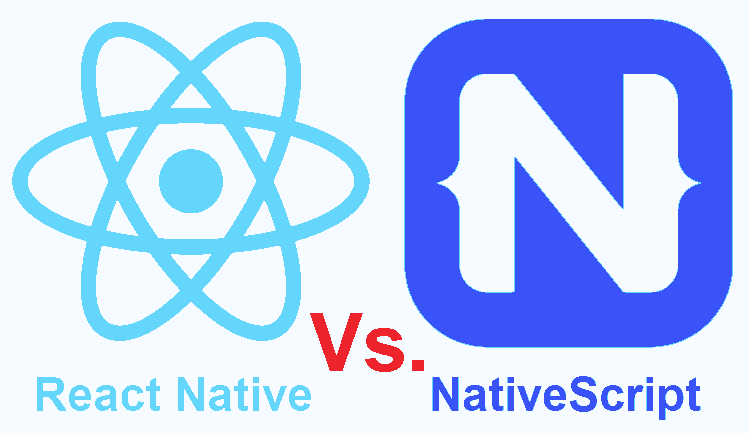 NativeScript vs React Native - Which One to Choose in 2022?

Cross-platform development has always been the key in exchange for lower costs and shorter development time frames as developers need to sacrifice some performance from the user experience. However, with the introduction of React Native or NativeScript, these limitations are no longer held on stay. Now developers can build native-like apps with one codebase and seamless performance and even used codebase for the web equivalent of the same app.

While there are a few tools out there that allow developers to build cross-platform apps, they all share a similar goal in building high-quality mobile applications with a native feel and functionality. This article will compare two popular cross-platform frameworks, namely React Native and Nativescript.

How do these frameworks work?

Before taking NativeScript vs React Native apart, let's briefly go over how they work.

You write your app and then compile the code base into native UI components using React Native vs NativeScript performance. Behind the scenes, the calls are written in JavaScript in each tool and mapped to native UI elements on a given mobile platform.  For example, text rendering is interpreted as UIview on iOS and a text view on Android. Nevertheless, it becomes essential to remember that react-native and Netscape don't spit out the code in a native app language,i.e., Kotlin for Android or Objective C for iOS.

Following are the main differences between React Native and Native Script:

React Native is the most popular cross-platform framework that gains other comparable frameworks, such as Xamarin, Flutter, Ionic, or NativeScript. But popularity is not necessarily a fair measure of comparison. If the reaction is formed through Facebook, it is easy to explain the rise in popularity which it has essentially experienced from the start.

More than that, according to the State of JavaScript 2019 poll, React Native's corporate support is the third most favourite part of the framework for developers utilizing it.

The large community of React Native is responsible for the large third-party libraries and plugins repository in the framework. Due to its huge popularity, developers in React Native might also be easier than NativeScript to find, and the dev pool accessible is significantly larger. It is especially critical when a new project has to be started, and an experienced team has to start working with it soon.
Plugin marketplace

On the other hand, NativeScript has an official plugin store that has been continually maintained and extended - an important feature that React Native does not have. You have to rely on plugins and libraries produced by its large contributor’s community using React Native.

The negative is that, although there are many repositories, there is always a chance that these third-party repositories will be abruptly discontinued. If this happens, developers either need to hunt for or apply adjustments on their own to something with similar functionality, which can boost development time and expense.

Out of the box, React Native has a fundamental set of API modules that allow developers to access native device features. It is where developers of React Native must turn to modules from third parties. However, so many modules are accessible that the community lacks the essential API bridges with very advanced functions.

You must type the bridge manually if your application wants a non-supported capability. Although React Native offers official tools to develop API bridges, they need to be used more than an intermediate understanding of native languages.

In this respect, the methodology of NativeScript is completely different. For example, "NativeScript injects into JavaScript Virtual Machines instead of API bridges," All iOS and Android apps" (after NativeScript.org). Consequently, it is easier to use native APIs and does not require language skills particular to the platform. Keep in mind that some features are best developed in a certain mother language as modules — this helps solve computationally difficult performance problems.

Upon implementation, they build native default styles to meet the platform-specific demands of the application being developed. React Native emphasizes the style of the components for each platform so that it looks and feels even better. On the other hand, NativeScript is more of a "writing once, run all over," even though the components can be separately designed to mimic native applications.

As you might have guessed, the difference between NativeScript vs React Native won’t have a clear winner, as the verdict ultimately depends on the availability of reliable and experienced specialists proficient in either framework. When choosing between React Native and Native Script performance-wise, remember that you may have to make some native language changes to maximize the performance and user experience of apps for a particular platform in the course of developing your application – especially if you are building a robust, feature-laden app.