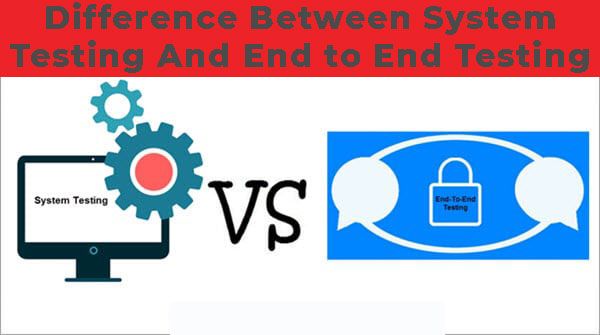 What Is The Difference Between System Testing And End to End Testing?

Both system and end to end testing hold very important positions in the Quality Assurance process of a software. Testing is that stage in the software development life cycle at which the development that has occurred is verified. The outcomes of testing are either that the software is working as expected or it will detect some defects and the software will be returned to the development team for correction.

This testing is done by developers to check a recently coded unit or a module.

This testing is done before integrating a unit tested the module with the rest of the program.

When all the components are integrated and the complete model of the software is created then system testing is done.

This test is done to execute the software from beginning to end like a user. This software will keep on rotating in this cycle until it passes the testing stage with detection of any defect.

One difference between System testing and End to end testing is the level at which each of these testing is done.

Before knowing ‘how both of these testing methodologies are different from each other?’ we will discuss them in detail.

At system testing stage, the software is completely developed to work as per specifications from the developer’s side and the final product will almost stay the same, though the software may have some bugs or defects. Till this testing, all the components are integrated to work as one and the task of system testing is to check ‘if all the requirements and features are working in the desired way?’.

System testing is a kind of Black Box testing, which means it has nothing to do with the code written or ‘how the workflow of the software is designed?’. It only cares about ‘if the system is good enough to satisfy the needs decided at the beginning of the software development life cycle?’.

The outcome of the testing is decided based on the ease of interaction with the software and comparison between the expected result and the actual result for a given input or instruction. Functional testing is a major part of the system testing but along with that it also focuses on the performance testing of software.

Performance testing checks the working efficiency of the software when executed under various real-life loads and working conditions like different networks. Security testing and Usability testing are also considered under system testing to ensure ‘if the application is safe and easy to use?’. Security of the data a user provide and store on the software is one of their major concern. Even accessibility testing is also important to check the compliance of the software with the various protocols so that all the users can access the software easily.

The testing will check for everything the stakeholders want to be present on the final product and let the team know about the scope of possible improvement. System testing can be completed using automated tools available in the market like Selenium, Appium.

End to end testing is carried out after the system testing to check the working of the software from its beginning to the end. It tests for the efficiency of the software to accomplish the task that requires it to interact with interfaces available outside the system’s environment.

E2E testing is the overall testing of the software and carried out with keeping user experience on focus. The software is executed the way a user will be handling it to perform some task. It ensures that ‘if all the components within and outside the system are working properly with each other to accomplish a task and there is no hurdle in a feature’s path to behave the way it should be?’.

The software is tested by making it to interact with databases, network, hardware, and other applications. It helps in identifying the weak links in the communication between these components. When software needs to work in collaboration with other application than it becomes necessary to implement those actions again and again before the user will perform them.

End to end testing is not a quick process it requires time and efforts. The testing should be done thoroughly to assure quality user experience. The productivity of the test depends upon the knowledge a tester have about the system and its subsystems. Even it cannot be left on automatic tools to perform the test as writing tests for dependent applications are very complex.

Difference Between System Testing And End to End Testing

Below are the differences between system testing and end to end testing:

System Testing and E2E testing helps in bringing bugs to the knowledge of the developer’s team when the basic development of the software is almost done.

This is how the Quality Assurance team can get the product ready for deployment.