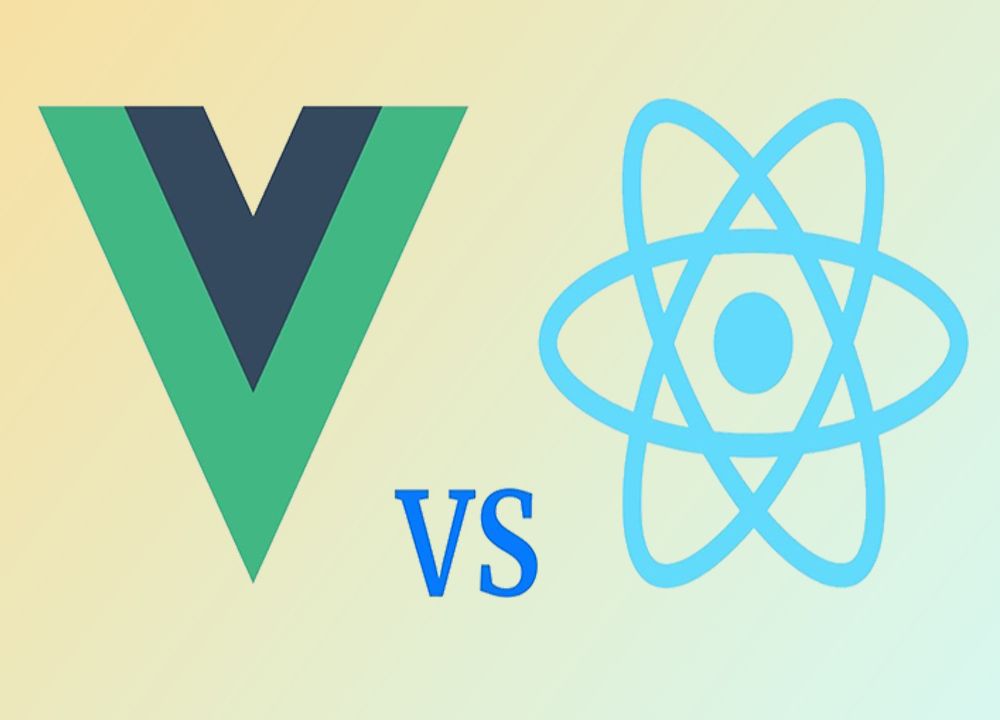 JavaScript frameworks are not essential for web app development, and many companies struggle to choose between React and Vue for their projects. The very short answer is that there is no clear winner in the general React.js vs Vue.js debate. Each framework has its oven pros and cons as it is useful for different applications. Here we have put together a guide for helping you better understand the use cases of both frameworks and determining which one will work best for your next project.

Vue vs React- What are they?

React, and Vue are JavaScript open-source frames that enable developers to build sophisticated user experiences easier and quicker. We will give you a quick summary of each of us before getting into the Vue vs React comparison with other frameworks.

The React JavaScript framework provides greater flexibility by using small, separate code parts, which developers may employ to design more complicated logic and user interface. A "virtual DOM" is a duplicate of the actual DOM and interacts with HTML content. However, all elements are represented as JavaScript objects. These aspects simplify and speed up development alongside the declarative programming approach of React and the single-way data binding.

Vue also has two-way components and binding systems and employs a virtual DOM. But Vue's main attraction is its gradual design. Vue is intended to allow developers to progressively move current projects one by one instead of all at once. Thus, you may use Vue as a complete framework, a lightweight library, and anything in between, depending on the requirements of your project.

Differences between Vue and React

Here are the key differences between React and Vue:

React differs in terms of its lack of built-in architecture from other frameworks and libraries. Instead, it utilizes a component architecture that has its advantages and disadvantages. Components that perform as functions and react to changes in data produce reaction UIs. Therefore, the internal architecture consists of the continuous interaction between the component state and the activities of the users.

Vue's focus on the ViewModel MVVM model paradigm works well for broader uses. The View and Model are connected via double-way data binding. Vue's main aim is to create a simple, flexible viewing layer rather than a comprehensive foundation.

React has an edge because of its simple scalability when considering using Vue vs React comparison with other frameworks. As React applications employ JavaScript alone, developers may use conventional scaling approaches. The reusability of the component improves the scalability of the react. While Vue may also be scaled, it is most typically utilized in smaller projects due to a large choice of versatile tools (although the app's size depends on the architecture). Due to its dynamic nature, Vue libraries and Mixin components can circumvent the constraint of scalability.

In the documentation, Vue is the obvious winner. Vue Web site offers superb quality, extensive, multi-lingual explanations and is widely recognized as the finest in the market by its documentation and API references. A variety of problems and concerns can be answered clearly in the papers. However, since the community of Vue is not as extensive as React's, it may be more difficult for you to receive the proper solutions to topics not covered in the manual.

There is nowhere like Vue's degree to react to documentation. Thus you will turn to the community far more often to solve obstacles and problems. However, React has a large, active community with a wide range of learning materials.

It leads us to the subject of community support in response vs. view. The community supports new and seasoned developers and generates third-party solutions and tools. It is an essential aspect of any technology. Facebook, which utilizes it in its applications, develops and maintains React. It thus has much continuous support and is engaged in building and maintaining new tools constantly.

Vue began with a developer rather than a company. Therefore it did not benefit from React's early popularity bump. Many developers believed that it was not dependable and reluctant to take it when it was originally introduced. But because of ongoing support and contributions from the user community Vue has seen tremendous development and popularity increase.

Vue is, without a doubt, the most popular JavaScript framework, with 181K Github stars. However, the reaction with 165K stars has become second and continues to develop and acquire new people. Web apps are created with Vue.js and React by several renowned firms.

Both Vue and React have their safety flaws, although view applications are a little simpler to protect compared to react apps. While automatic protections from such vulnerabilities are not possible, Vue developers can sanitize HTML before implementing or use external libraries to protect against attacks. Then, if you know that the HTML is safe, you can explicitly render HTML content and protect the application both before and after rendering.

Reaction security relies on developers to guard against XSS vulnerabilities, server-side attacks on rendering, SQL injections, and other threats using recommended security practices. It may involve leveraging the Javascript serialize module, exploiting script injection issues, and employing safe apps for React Native. So while React is simple to use, it needs a lot of know-how and know-how to guarantee reaction applications are safe.

The job market for React vs. Vue

The popularity of reactions makes it possible to recruit a broader pool of skilled developers. More than 48% of developers feel comfortable using Reacted, but just 23% claim to operate Vue at a comfortable level, according to the 2019 Front End Tooling study.

You can hire only 19% of developers, while 33.2% of firms are interested in react developers. Moreover, whereas 10% of businesses require Vue developers, only 5.1% are competent. The view continues to rise, though, and in 2020, developers wished to study fourth-class technology. This surge in popularity and the great documentation and learning facility of Vue are expected to lead to a growing number of qualified view developers.

To sum up, React enjoys better corporate support, better popularity among developers, and a huge community that can respond to any questions. It is also easy to dimension and is usually recommended for complicated business applications. On the other hand, although Vue is not currently extensively supported and utilized, it continues to grow in popularity, mainly because of its great documentation, usability, and gradual adoption skills. Vue also features a broader range of integrated tools and solutions.

With Vue CLI 4, it takes as little as a few weeks to design and deploy a market-ready solution when considering the pace of React versus View development. Both are excellent frameworks for any modern web application, and the Vue vs React pros and cons change depending on the use case. Your project goals and preferences are the correct answer.