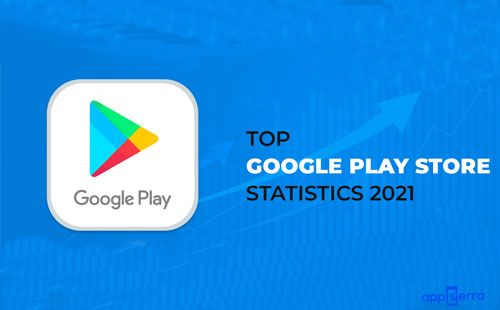 Google Play Store Stats : Prime Facts That You Must Know

The success story of Google is not unknown to the world. Their services are loved and used worldwide. In this article, we will be explaining the top Google Play Store stats and how it is impacting the likes of users and businesses across the globe.

There is never a dull moment when we talk about technology, and it promises to thrive for as long as we could imagine. What started from the first invention of the wheel has today come up so far that everything we wish to do or to have is now a click or tap away. Not that you don’t already know but let us put it there anyways as Google Play Store stats is the digital distribution service provided by Google LLC. It is a platform that empowers Android mobile users to download apps directly from the store, and the apps could range from 10 MB – 4GB.

Below are the most-awaited and interesting top Google Play Store statistics. Ones that have made the previous year one of the most prosperous once when will look back at the birth of Google Play Market Share.

Google is one of the majorly trusted platforms, and it is used by millions of users daily. Because of this, popular mobile app developers have begun to utilize this platform. It is the reason why there is an increase in the number of apps on the Google Play Store.

Using Google Play Store to its full extent, this process has based the answer of how many apps are in the Google Play Store Stats to an average of 2,714,499. According to research performed by AppBrain, this number is expected to rise by the end of 2022.

A total number of apps released per week and month

There are no speed breakers on the road towards increasing demand for mobile applications. To be accurate, 3739 applications are added to the Google Play Store daily. It could Seema significant number when we discuss apps in billions. Nevertheless, this number does add up and leads to a notable amount of an extended number of mobile applications. The consequences of this will be difficult to ignore in 2022.

As the demand for every category and niche is high, the number of downloads per day has also increased within the last two years, and it is also because the market has been viewed by a rapid increase in the demand for smartphones. In Sensor Tower’s report, by looking into Google play store statistics, they have estimated the number of downloads made to be 250 million.

The demand for Google Play is unavoidably noticeable as it has observed a hike of 16.4 % from 2016 to 2018. Meaning in the first half of 2019, the total number of installed beasts 41.9 billion, is certainly an upgrade from the previous year’s 36 billion.

The average price of an application in the play store is between $1 to $2. This data is collected based on apps under the price of $10. Being more eloquent, there are approx 44,000 Plus apps under $1, and these are some of the apps fancied by the users once they have to experience the free model of an application.

According to Android and Google Play statistics, there are currently 2,589,804 free apps on the Google Play Market Share that I wouldn’t leave to make most of the applications. If we are wondering how to develop and revenue when the applications are free? After all, earning money is the whole point of developing apps? We might be surprised to know that most of the revenue earned by mobile applications arises from free applications by app monetization strategies in the app purchases that are equivalent to 98% of app revenues news worldwide.

If we talk about paid apps, we hardly might have paid applications on our device; nevertheless, if we say otherwise that we belong to the minority of the paid app demographic. There are over 1,25,894paid apps on Google Play Store, according to research by Statista.

How many people use google play? It is usually believed that younger generations, by default, spend more time using mobile apps than the people of the older generation. There is no doubt that generation x, since the beginning, has seen technology all around, so they are more engaged with technological trends. Nevertheless, it doesn’t mean that we cannot forget the rest of the age groups. We can find a way to find the app usage statistics by looking at the frequency on which apps are open daily by people of different age brackets.

Now that one is not restricted to any one device for accessing the internet; people may use numerous Android devices like tablets, smartphones, laptops, desktops, etc. Nevertheless, research has shown that some specific app categories have a high use rate in smartphones. Maps, instant messengers, music, games, photos, weather, etc., are included in those applications.

Where we are talking about desktops their decision rate is still maintained. It is the result of their ridiculous specificity that proves ideal for certain purposes.

The popularity of Entertainment apps

1/6 of consumers’ overall media output will consist of online videos that will be shown on moving screens between 2019 and 2020 in the research carried out by AppAnnie. It is sufficient for us to conclude that this particular category is increasingly being used and searched, especially in the play shop.

The popularity of Gaming Apps

The estimated figure for smartphone players was 2,2 billion in the world by 2018. The US is home to 203 million smartphone gamers, and China has 459 million. This growing amount creates lots of money for the Google Play Store Stats. As the gaming app’s success is growing, the enormous growth in the overall sales is also expected.