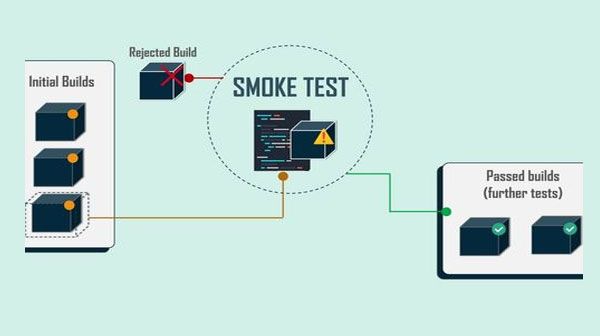 What Is Smoke Testing? A Complete Tutorial

Smoke testing is a procedure of software testing that is used for determining whether the deployed software built is stable or not. Smoke testing could also be understood as a confirmation for the QA team to proceed with the software testing. Minimal sets of tests are run on each build for testing software functionalities. Smoke testing is also known as build verification testing your confidence testing. In simple terms, we are checking if the essential features are working and there are no showstoppers in the build that is under testing.

It is a small and fast regression test for Major functionality. It is very simple to stick and shows the product is ready for testing. It helps us determine if the bill is flawed as for making any further testing a waste of time and resources. Smoke tests verify the quality built for formal testing. The main goal of smoke testing is detecting any early major issues. These tests are designed to demonstrate system stability and conformance to requirements. All data files, libraries, reusable modules, and engineer components required for implementing one or more product functions are included in a build.

When should we do smoke testing?

Smoke testing is performed whenever new functionalities of the software are developed and integrated with an existing build deployed in a QA staging environment. All critical functionalities are checked if they are working correctly or not. The development team extends the built-in q&a in this testing method. Then the subsets of test cases are run, and then testers test cases on the build. The cured time tests the application against critical functionalities. The series of test cases are designed to expose errors in the build, and if the tests are passed, the QA team will continue with functional testing. Any failure will indicate a requirement for handling the system back to the development team. Whenever there is a change in the build, we can perform smoke testing to ensure stability.

Who will perform smoke testing?

QA engineers perform smoke testing after releasing the build-in QA environment. Whenever a new build occurs, the QA team has developed important smoke checking features. The QA team checks for showstoppers in the application that is under testing. Testing is done in a development environment on the code for assuring correctness of the application before the build is released to build a QA. This process is known as sanity testing, and it is usually very narrow and deep testing. It is a method that verifies that the application under development is meeting its basic functional requirements. Completing the development phase is determined by smoke testing vs sanity testing, and it decides whether the software product is to be passed or not for further testing phases.

Why do we do smoke testing?

Smoke testing plays an essential role in the software development life cycle as it guarantees the accuracy of the system in the initial stages. We can save a lot of test effort because smoke tests bring the system to a good state. Once we complete smoke testing, only then can we start with functional testing.

How to perform Smoke Testing?

Smoke testing is normally carried out manually, but Automation is also possible. It may vary from organization to organization.

Smoke tests are usually performed manually. It deals differently between organizations. Smoke tests ensure that vital routes are navigated as intended and that the functionality is not impeded. If construction is issued to QA, high-priority test cases are taken, and the critical flaws in the structure can be checked. We resume the practical tests after the test passes. If the evaluation fails, the construction will be dismissed and returned for adjustment to the production team.  A new build update begins QA smoke tests again. Smoke tests are carried out on modern buildings and integrated with existing structures to ensure correctness. Smoke tests are carried out on modern construction and combined with old systems to ensure their correctness. The QA team should review the right build versions before conducting smoke checking.

Automation Testing is generally used for Regression Testing. However, an automatic test case collection may also be used to fight the Smoke Test. Developers will automatically verify that a new structure is ready for implementation by automated testing. The reported smoke testing tools would be performed against the build rather than manually replicated when the new product is implemented. It checks if the main features are all working correctly. If the evaluation fails, they will automatically correct the construction and repurpose the build. It allows us to save time and ensure the consistency of the QA environment.

Also, read How to Find A Friend Code in Steam and Add Steam Friend Id?

The flow chart below demonstrates how to do Smoke Testing. We can continue functional testing until the construct is implemented in QA and smoke checks are completed. If we fail the smoke test, we leave the tests until the problem is solved in the build.

We should perform smoke testing on every build without failure as it helps find defects in the early stages of the software development process. Smoke testing is the final step before the software build enters the system stage. We must perform a smoke test on each build that is turned for testing. It applies to new development and major and minor releases of the system. The QA team must guarantee the correct build version of the application under test before performing smoke testing. It is a very simple procedure that requires minimal time for testing the stability of the application. The smoke test could minimize the test effort and could improve the quality of the application. We can use smoke testing tools either manually or by Automation, depending on the client and the organization.