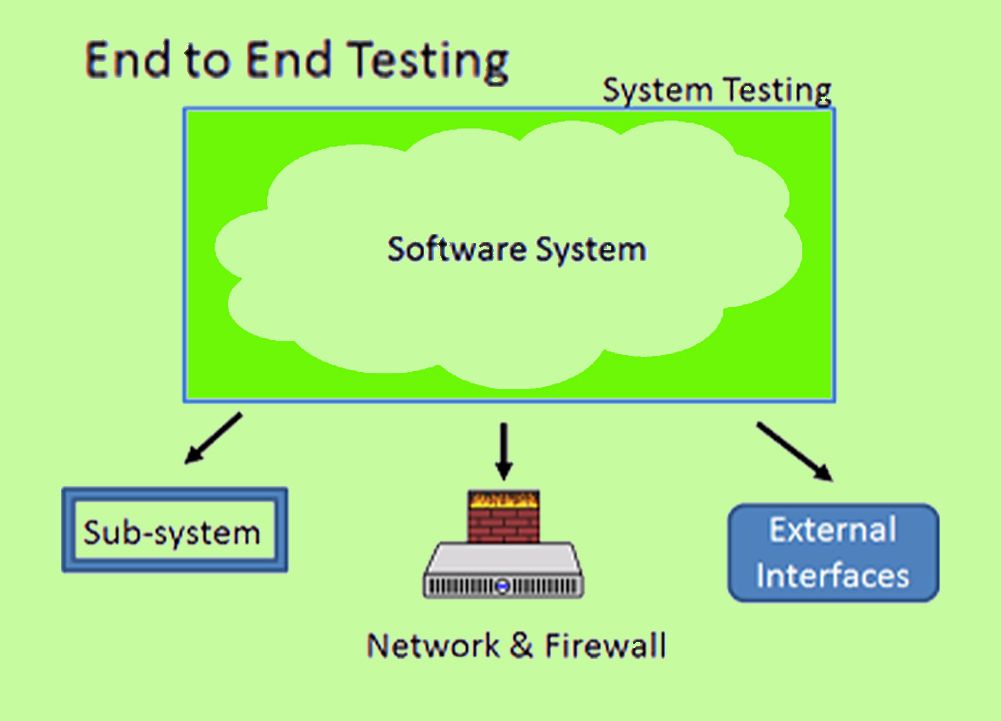 What is End to end testing?

End-to-end testing refers to a software testing method that involves testing and application workflow from beginning to end. This method aims at replicating the real user scenarios so that the system can be validated for integration and data integrity.

Essentially, every operation on the application going through the test could perform to test how it communicates with hardware, network connectivity, external dependencies, databases, and other applications. Usually, end-to-end testing vs integration testing is executed after functional and system testing is completed.

The steps below are required for initiating and completing any E2E test.

Let's assume that testers have to check that a Gmail account functions. The following characteristics must be tested:

The following three activity categories must be included in the E2E tests:

Do the following to create user functions:

Make the following for building circumstances depending on user functions:

Consider the following for the development of test cases for E2E testing:

Various factors are to be considered for tracking the progress of end-to-end tests:

Test case preparation: These are the test cases being created today to test every feature of the software. The graph representing this should show the rate at which planned test cases are crafted.

Weekly test: A percentage of base reports of test completion each week is extremely essential. The most critical parameter that is currently being executed was not executed and the test cases failed.

Defect details: The percentage of defects that are identified, closed, or opened each week is important. It encourages testers and managers to keep track of bugs and supervise their resolution by assigning them a priority. It compares the amount of time scheduled for testing each day with the time actually spent in the testing environment.

The following are the primary challenges in end-to-end testing

Detecting problems organically in a complicated system implies challenges. Two major ones are explained below:

For examining an app workflow, the test cases in an E2E test suite need to be done in a particular sequence. This sequence should match an end-users path as they navigate through the app. Developing test suites to match this workflow can be time-consuming, especially since they typically involve creating and running thousands of tests.

It is easy enough to test apps in development environments. All applications must, however, be tested in customer or production settings. Production environments are probably not always available for testing. Testers must install local agents and register on virtual computers even if they are.

Testers must also anticipate and prevent problems such as system changes that may stop test performance. Testing on a real device cloud is the greatest method to get a suitable test environment. If in-house device labs are an option, utilize a cloud Selenium grid for 2000+ actual devices and browsers for testing reasons. Use a service like BrowserStack.

Why do we need end-to-end testing?

Each program is connected and integrated beyond its own environment with numerous systems and databases. This, of course, complicates the workflow of the app significantly. The E2E test verifies whether different application dependencies function properly. It also verifies whether valid data between various system components are being transmitted.

Backend: E2E testing checks an application's database and backend layers. This is important since the key features of the app depend on backend capabilities.

Multi-tier system: if an application has a complicated architecture with a multi-tier workflow, E2E testing is needed to validate all the functionalities as well as the interactions inside the architecture between different levels.

Distributed environment: E2E testing is required if an application is built on SOA (service-oriented architecture) or cloud environments. Apps consisting of numerous components that must operate in conjunction for proper operation are also essential.

Consistent user experience: As E2E tests entail an interface, it also guarantees that the software offers a user experience that works across different devices and platforms. For example, cross-browser compatibility testing is an essential element of E2E testing.

Because the end-of-end tests are important, they should be planned right from the start of the project. Please be aware that end-to-end testing frameworks are best carried out manually as the testers can remove the users' shoes. However, it is recommended to confine automated testing to low-risk features that need repetitive action only. End-to-end testing vs integration testing will be viewed as an unreliable element of the test pipeline. Prepare from the earliest stages so that the user doesn't need to cope with preventable disturbances in his experience.