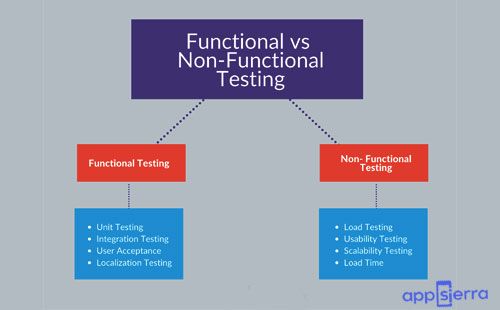 Know These Key Differences Between Functional And Non-Functional Testing

What is Non-functional testing?

Non-functional testing can occasionally need more technical expertise and creativity because you are testing what the consumer wants for an all-around quality experience and not X input directed to Y output. Let’s have a glimpse of the chief non-functional testing techniques:

Whereas with functional tests the bar is already established. Eventually, knowing the difference between these two types of tests can benefit during test planning, so that you are precise on what is being covered and why. As we understand that testing is the most significant stage in the method of delivery of any application or software as it is just testing which not only substantiates the quality of an application but also furnishes an opportunity to the creator to enhance its product. The entire application is being formulated as per the requirement of the customer or client so established on testing, the functionality of the application based on these requirements, and testing the performance and usability we can differentiate between Functional and Non-functional Testing.